Graphic designers have lusted after Wacom's Cintiq line for years: the combination of a stylus-enabled touchpad and a full monitor makes them ideal for working directly in design suites. But thanks to their out-of-this-world price tags, most of us could only admire them from afar, settling for the cheaper Bamboo or Intuos pad. Now Wacom is expanding into the Android world with the 13.3"Cintiq Companion Hybrid, a full Android-powered tablet that turns into a Cintiq monitor when plugged into a computer. 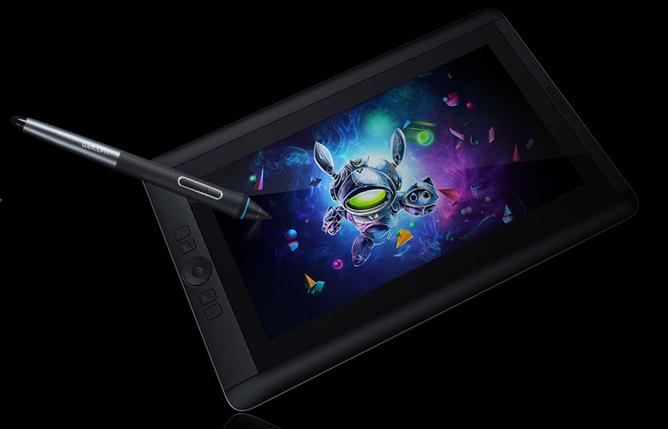 If you've been keeping up with the evolving Cintiq line, you probably already know that the other shoe is going to drop. Here it is: the Cintiq companion Hybrid starts at a soul-crushing $1499 for the 16GB version, ballooning to $1599 for 32GB. (Hey, it could be worse: the Windows 8 version of the tablet starts at $2000.) At least you get a super high-end tablet for all that cash. The 13.3" screen is a full 1920x1080p and has 2048 levels of pressure sensitivity and 75% of the Adobe RGB gamut. There's an NVIDIA Tegra 4 and 2GB of RAM providing the power to Android 4.2. Other charms include a MicroSD card slot, MicroHDMI out (a full HDMI port provides the monitor's video-in source), USB 2.0, and 8MP and 2MP rear and front-facing cameras, respectively. Buyers also get a Wacom Pro digital stylus, an adjustable stand for desktop use, and a travel case. 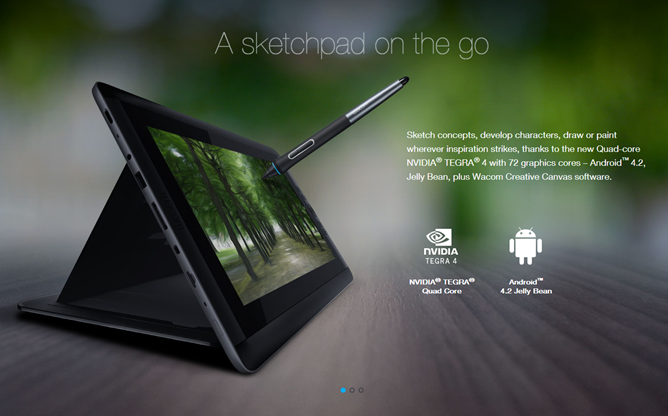 The Cintiq Companion Hybrid comes with Wacom's Creative Canvas app for mobile creation, but you won't get the full benefit of all this stylus-centric hardware until you plug the tablet into a PC or Mac with the 3-in-1 data/video/power cable. There it becomes a secondary monitor and graphics tablet, complete with Wacom's customizable action buttons and Touch Ring scrolling button, which can be bound to various actions in your favorite graphics program. 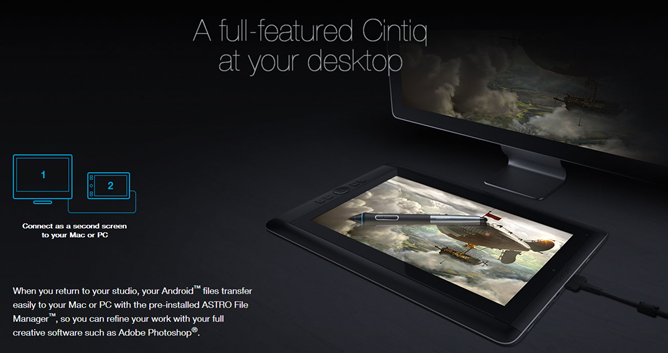 The Cintiq hardware has always been ultra-premium and high-margin (and a bit of a status symbol among designers and artists), but there's still a lot of sticker shock here when similarly-equipped Android tablets are going for well below $500. Even allowing for Wacom's advanced digitizer and fancy monitor functionality, three times the price seems a little indulgent. Suddenly the $600 originally charged for the Galaxy Note 10.1 (with a Wacom digitizer) doesn't seem so bad.

The Cintiq Companion Hybrid Tablet is scheduled to go on sale directly from Wacom in September.

VANCOUVER, Wash., Aug.19, 2013 /PRNewswire/ -- Staying on top of evolving trends in the creative community and responding to frequent requests from professional customers, Wacom® extends the creative experience from the desktop to a mobile environment with the new Cintiq® Companion line of creative tablets.

The Cintiq Companion line, available in two models, enables creative professionals to work wherever they want. The Cintiq Companion runs Windows 8 and full versions of creative software and offers everything a customer would expect from Wacom's Cintiq products. The Cintiq Companion Hybrid, on the other hand, is a traditional Cintiq when plugged into a Mac or PC, but when used as a mobile device, works as a stand-alone Android® tablet with enough power to do light sketching and start creative processes with suitable apps. The new tablets were developed to bring unprecedented freedom to the creative workflow. They also ensure a distinct Cintiq experience even in mobile use, leveraging key elements of the Cintiq 13HD and Cintiq 22HD touch, for example, full HD display with touch control and the Wacom Pro Pen with 2048 levels of pressure sensitivity as well as tilt recognition.

Cintiq Companion Hybrid - the digital sketchpad on the go
For illustrators and designers who want to draw, sketch and paint when mobile, but who also want to use their professional software when connected to a Mac or PC, the Cintiq Companion Hybrid offers a 'two-in-one' solution. The Cintiq Companion Hybrid functions as a traditional Cintiq when connected to a Mac or PC. When unplugged, it is perfect for light, spontaneous work using Android™ apps. The tablet comes with a powerful Nvidia® Tegra® 4 processor, Android Jellybean and specially designed software such as the new Wacom Creative Canvas for painting and sketching. For further refinement when back in the studio, rough images can be easily transferred to a computer or shared directly to popular cloud services with the easy and pre-loaded ASTRO File Manager™. Two versions of the Cintiq Companion Hybrid are available, a 16GB version and a 32GB version.

As creative professionals require comfort and ergonomics to offset long working hours, an adjustable and detachable stand is also included with both products, offering four working angles – from flat to upright.

To pre-order a Wacom Cintiq Companion or Companion Hybrid in the US, please visit the Wacom eStore and follow the ordering instructions.