Good evening, Australian readers. If you're reading this story right after it's posted, it's very nearly Wednesday by your clock, and you're one day closer to getting Google Play gift cards down under. The Google Play support page for gift cards was recently updated to include Australia, saying that prepaid cards will be available in denominations of $20, $30, and $50 AUD. 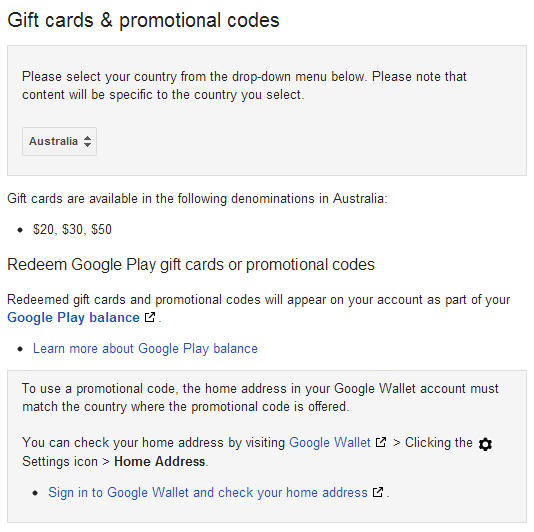 The cards themselves don't seem to be on store shelves just at the moment, but according to an anonymous tip sent to Ausdroid, they've already been sent to a "national supermarket chain" and are awaiting an official rollout on Monday, August 26th. Previously the code redemption infrastructure for gift cards and other promotional codes was already put in place to allow Australian carrier Telstra to bundle a $50 Google Play card with new account signees.

After reaching out to Google, Ausdroid got a tepid confirmation:

Google Play gift cards will soon be available in Australia. We’ll have more information to share when they hit shelves.

If you're wondering what the big deal is, consider that many people use these prepaid cards to avoid needing a credit card to access paid apps and media. Google Play gift cards are currently available in the US, UK, France, and Germany (and Canada, according to some isolated reports), with other promotional codes working in the US, UK, Australia, and Canada. All the pieces seem to be in place, so it looks like the only thing that Australian Android users are waiting on is for the cards themselves to go on sale.