While we haven't heard a peep about the Android 4.2 update rolling out to the HTC One in the US, it's old news in Europe. In fact, HTC is already rolling out the 4.2 update to last year's flagship, the HTC One X, on that side of the pond. European owners of the Tegra 3-powered handset will now get to taste Sense 5, including BlinkFeed, but they have the option to disable the latter if they're not interested. The update also brings in video highlights, music visualization with live lyrics, and more. 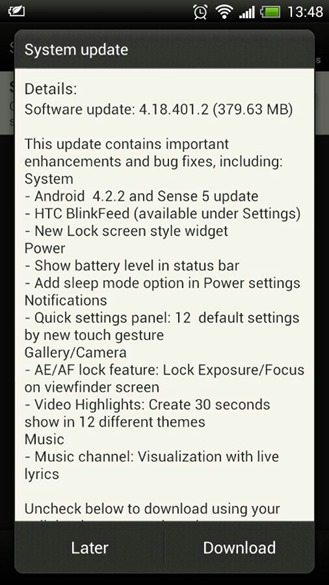 The 4.18.401.2 OTA comes in at just under 380MB and looks to be rolling out across most of the continent. It's going out to the unlocked European HTC One X (codenamed Endeavor). There's a zip available on this XDA thread, but as usual, it's safer to wait for the update to arrive on its own.

WigWag "If This Then That" Intelligent Sensor Completes Kickstarter Campaign With 9x Its ...