The folks at CyanogenMod never seem to sleep. After adding no less than thirteen devices this month, they threw two more official builds into the nightly updates this weekend, both for Samsung hardware. The international LTE version of the Galaxy S4 Mini and Verizon's localized version of the Galaxy Note 10.1 both have shiny new pages on Get.CM. 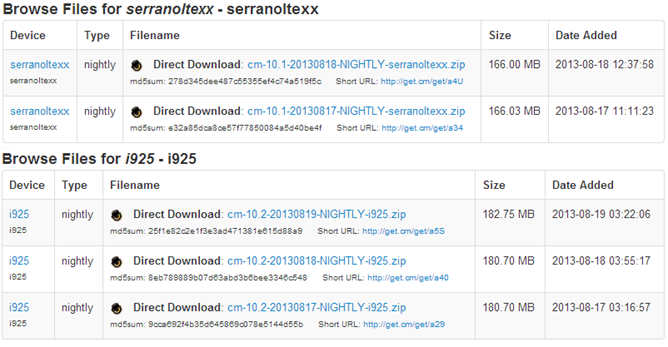 The Galaxy S4 Mini is on CyanogenMod 10.1 (Android 4.2), with two nightly builds available at the time of writing. This is the unlocked LTE version (GT-I9195) of the smallest member of the S4 family, not to be confused with the 3G (GT-I9190) or dual-SIM model (GT-I9192). If you're wondering why one is supported over the other, the CM team works first on their own devices, then builds on that code to expand. The S4 Mini LTE should get a CM 10.2 build sooner or later.

On the other hand, the Galaxy Note 10.1 for Verizon gets CyanogenMod 10.2 (Android 4.3) right off the bat, with three nightly builds available at the moment. The SCH-I925 is the third model of the Note 10.1 to get official support, after the WiFi (GT-N8010) and 3G (GT-N8000) models. Galaxy Note 10.1 owners should be particularly happy for the custom ROM option, since the 1.5-year-old tablet is still running Android 4.1.

As always, you'll need the correct Gapps package if you intend to use the Google Play Store and similar apps with a CyanogenMod ROM. Nightlies are typically a little on the rough side (though the CM nightly builds tend to be pretty good), so if you're happy with your tablet's current performance, you might want to wait for a release candidate or stable build.