Mashable is sort of the middle ground for breaking stories and Internet memes: it includes metrics so that the most popular stuff gets to the top, but the formatting and content are friendly enough to appeal to a wider group of users than, say, Reddit. Now there's an official app available in the Play Store. Samsung seems to have secured an exclusive for the launch. 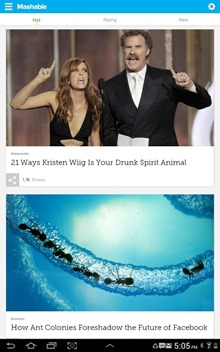 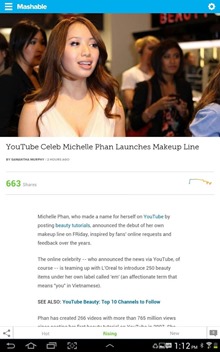 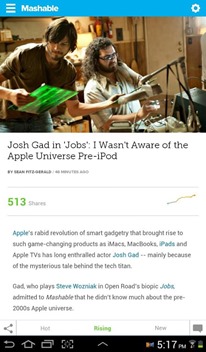 At the moment the description says that you'll need a Galaxy S4, Galaxy S III, Galaxy Note II, or any of the new Galaxy Tab 3 models to download and use the app. (The splash screen proudly displays "Presented By Samsung Galaxy S4.") Strangely, I was able to download and install it to two Motorola phones right from the Play Store. Both are running CyanogenMod ROMs, so take that for what it's worth. The description says that a "full public launch" is set for next week.

The Mashable app itself mirrors the design of the site, or at least the primary column. Stories are rated by social shares, with a rising score assigned to each one based on the source content. The tabs are split into Hot, Rising, and New stories, and the hamburger icon pops open a search bar and a list of categories. Once you finish reading a story, new items from the front page will populate as you scroll down, making for an easy continuous read. Notifications for quickly-rising stories keep you in the know. Comments for each story are handled in a separate window. 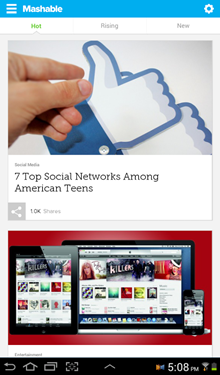 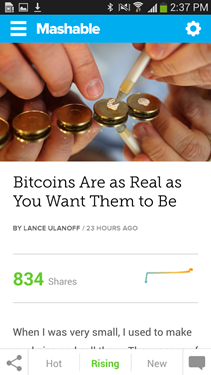 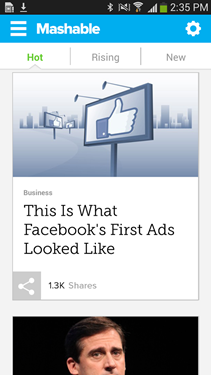 Though Mashable brands itself as a news site focusing on the web and social networks, there's a tendency for more entertainment and oddball news to float to the top - at the moment a story about zombified Disney Princesses is hanging out on the front page. Sometimes it succumbs to another bad Reddit habit: older content can make the rounds several times at long intervals.

ASUS Premium Cover For The Nexus 7 2013 Now In Stock At Amazon, Black And White Colors Available

HTC President: HTC One Developer Edition Will Skip Android 4.2.2 And Go Straight To 4.3