eBay certainly seems to like their Nexus tablets, not that we're complaining. After featuring the new Nexus 7 yesterday (and selling out rather quickly) they've repeated the Daily Deal on the Nexus 10 from exactly one week ago. That's $369.99 for a brand new 32GB Nexus 10, with free shipping to the United States. 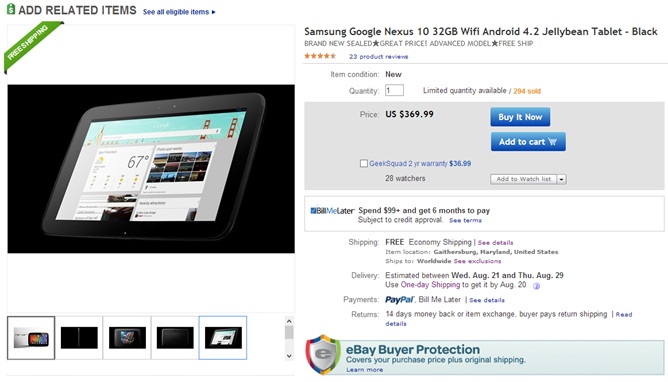 This tablet is brand new, not refurbished as is so often featured on eBay Daily Deals. The price is $130 off the retail cost of a 32GB tablet, not to mention the savings on taxes in all states except Maryland. At least some of our international readers will be able to take advantage of the deal, though those in India, Russia, Ukraine, and most of Africa, Southeast Asia, the Middle East, and the Caribbean need not apply. International shipping costs extra, and US customers can spring for faster shipping from the Postal Service or UPS.

This price matches the lowest we've seen yet for the Nexus 10 32GB, and beats a lot of technically brand-new tablets as well. (Which would you rather have: a year-old N10, or Samsung's "new" Galaxy Tab 3 10 for $30 more?) As always with eBay Daily Deals, the price is good for the rest of the day (in the US) or until the assigned stock runs out. If you want one, order it sooner rather than later.

ASUS Premium Cover For The Nexus 7 2013 Now In Stock At Amazon, Black And White Colors Available