If you've been meaning to get into the Google TV game and want to do it on the cheap, consider this your chance. The Sony Internet Player is Woot.com's deal of the day, selling for just $99.99, half off of its original retail price. As always, Woot primary sales are valid for one day or until the stock runs out. Standard shipping is just five bucks. 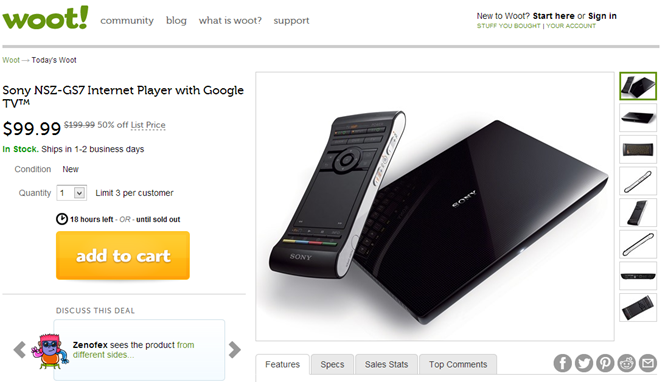 Sony has released three different stand-alone Google TV units, and this one is the second: the NSZ-GS7, first sold in 2012. It's identical to the newer GS8 model with the exception of the remote, which includes a microphone for voice searches in the newer package. The NS7 is currently going for $164 and change on Amazon, with the updated GS8 and its voice remote just a little more at $168. If the voice search feature is essential for you, Sony sells an updated remote that's backwards compatible with the older model for $50.

There are those who think that Google TV is on its way out thanks to the $35 Chromecast, but there's still something to be said for the expandable nature of the platform and its access to the Google Play Store. A vastly lowered price should make the Sony Internet player more attractive to home theater junkies.

This sale is for a brand new Internet Player, not a refurbished model as is so often featured in similar deals. Faster shipping is available for those who want it, and deal hunters can purchase up to three at this price. If $100 is still too rich for your blood, you could always hold out for a Woot-Off, where remaining stock on Woot.com is sold at even higher discounts in rapid succession.

PSA: Keyboard Shortcuts For Screenshots Are Back In The Web Version Of The Google Play Store