The new Nexus 7 seems like a pretty great device in almost every way. Despite reports of a few bugs, we're quite fond of it around here. Now the first official accessory has hit the Google Play Store to complement your Nexus – the zip-up sleeve (US and Canada only). It's... well, let's be honest – it's ugly and expensive.

There's nothing terribly special about this case. It's made from neoprene with a microfiber lining on the inside to keep your Nexus safe and sound. There's also an outer pocket to carry around earbuds, cables, or whatever else you need. 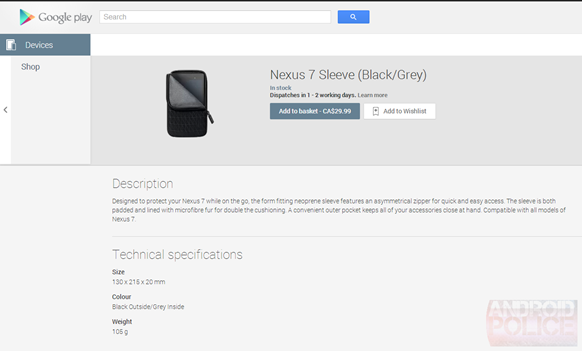 At $29.99 it's already quite a bit more expensive than similar (and more attractive) sleeves you can buy on Amazon, but it gets worse. The shipping charge is almost $20. The Nexus 7 itself ships more cheaply than that. We've checked for multiple addresses, and it's always that expensive despite the fact it can't possibly weight very much. Is $50 for an unattractive official case a good deal? You can probably figure that one out for yourself. If you've got your heart set on it, maybe check back later and see if the shipping is just some kind of mistake.

[Bug Watch] Android 4.3 - Automatic Looping Of Sounds With SoundPool Is Broken, May Cause Some ...

[Deal Alert] Dude, Dell's Got The Sprint HTC One For $30 On-Contract, Plus Free Shipping, Free ...