The amount of Bluetooth speakers on the market could easily boggle one's mind, with more manufacturers getting in the game every day. And while there are many worthy competitors in this somewhat-crowded market, one of our favorites in the "small and portable" category is easily the Braven 600 –  a small speaker with a lot to offer.

Today, we're taking a look at the 600's big brothers, and Braven's competitors with Jawbone's Big Jambox: the 850 and 855s ($300 each). The sound quality and size are virtually identical with this pair, with the primary difference being the 855s' rough-and-rugged build quality. It's built to take a fall, and its IPX3 water resistance means you can take this one to the beach without fear of ruining your $300 speaker. 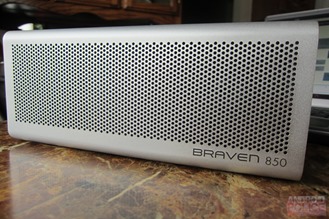 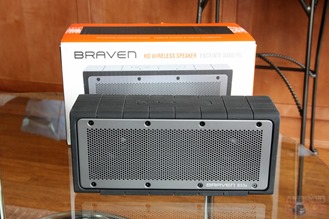 Since the 850 and 855s are largely the same outside of aesthetics, let's go in contrast to my normal speaker review methods and talk about sound first. Then we'll take a look at the exterior and what makes them different from one another.

While the 850/855s are still considered "portable" speakers, you'll immediately notice that they're actually pretty large. This, of course, means they're capable of producing more sound, stronger bass, and substantial volume. I actually found the sound quality to be somewhat of an interesting thing to focus on, because it can be very hit-and-miss depending on what you're listening to. Before I get into that, though, I want to talk about the speakers' SRS WOW HD setting. Yeah, that's really what it's called. 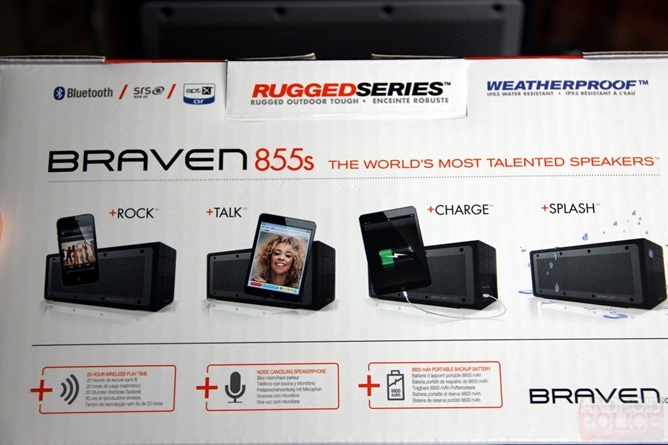 Right out of the box, you'll find that these speakers sound good, but a little "small." That was my experience anyway. After reading up on what they have to offer, however, I noticed the option to enable SRS WOW HD by pressing both volume buttons at the same time – the difference is not only immediate, but it's also drastic. I've honestly yet to figure out why this isn't enabled by default, nor do I understand why anyone would want to listen without the feature enabled. With SRS enabled, the bass is lower, treble is higher, and every sound is more pronounced. It sounds great by comparison – and that's honestly why I think this feature is there in the first place. I'm convinced that Braven chose to make this an optional setting just so users would hear the drastic difference and it would seem like a much better speaker than the initial impression leads on.

Here's a brief look at the sound with SRS disabled vs. enabled:

I guess at this point, a little backtracking is necessary. Earlier I said I don't see why anyone would want to listen with SRS disabled. I guess that isn't entirely true, because at high volumes, the speaker simply can't handle the SRS setting – it's just too much. Too much bass, too much treble; it just distorts. Thus, disabling it will allow everything to clean up at higher volume... though the audio quality won't be as good.

The 850/855s both feature 20w speakers, which can definitely bring the volume, especially considering the size of the unit itself. When cranked all the way up, it can fill a modern-sized house (1500-2500 square feet), and can easily provide ample tunes when used in an outdoor environment, too. It also responds very well to EQ adjustments – even the slightest tweak creates an audible difference. 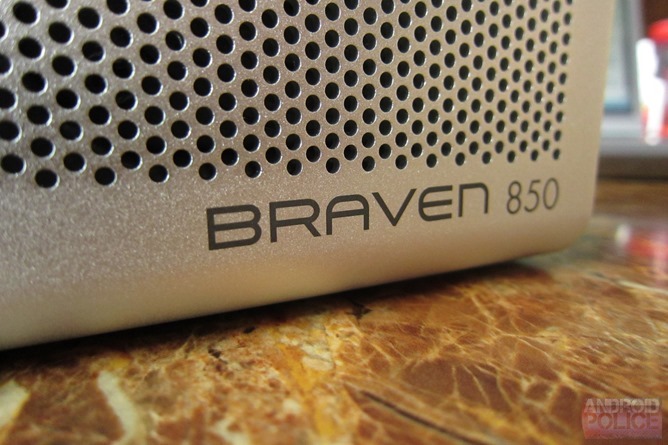 While the 850 and 855s are quite different on the outside, their features are a mirror image of each other. Both units can be daisy chained (even with each other), have auxiliary inputs for non-Bluetooth devices, and can be used as portable chargers. The latter feature is actually quite useful, and since both units pack 8,800mAh batteries, there's plenty of juice to spare. The downside, however, is that they're both quite heavy, weighing in at a whopping 3lbs. 5.5oz. I actually feel like this makes it too large to be considered portable, but still too small to be categorized with something like the Logitech UE Boombox (which features a handle for easier portability).

You're probably wondering exactly how much play time that 8,800mAh juice pack will provide you with. Braven rates it somewhere around 20 hours, and I found this to be pretty dead-on. I was able to use the 850 for two days of constant use while working (roughly 10 hours each day) before it finally kicked the bucket at the end of day two. Of course, if you have the volume maxed for hours on end, you'll probably kill it quicker, but I wouldn't expect to get anything less than 17 or 18 hours out of it, even under extreme listening conditions. Naturally, though, that will decrease the more you use it as a charger. 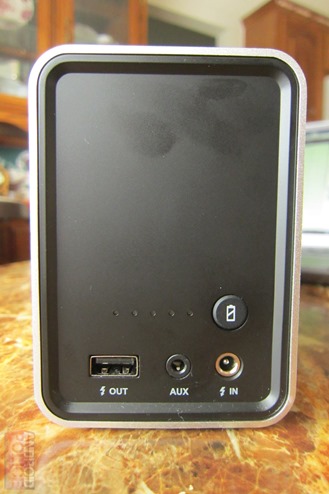 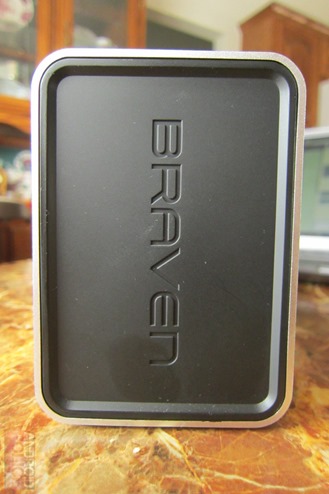 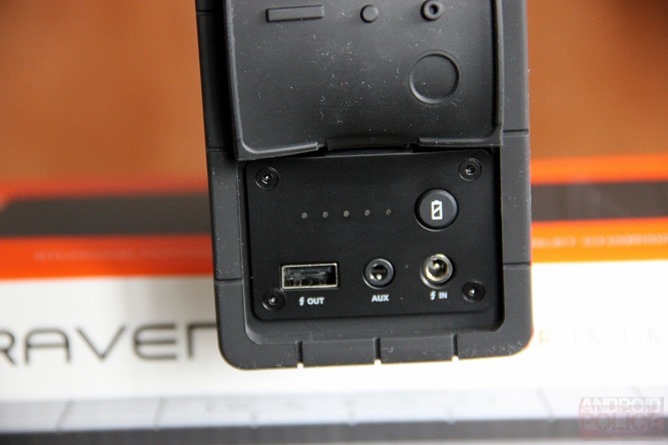 It's not all good, though – there are a few annoyances here. First and foremost, the lack of adopting the now-standard microUSB charging port and opting to go with a proprietary charger is a huge ding for both the 850 and 855s. Also, for some weird reason, both units auto-power down after a set amount of time without use, even when plugged in. This makes no sense to me on any level – if it's on AC power, there's no reason it should ever turn off. 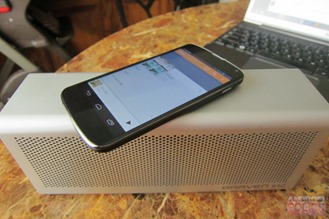 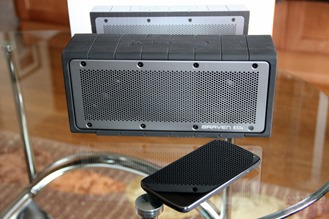 Stylistically, both speakers are actually quite similar to not only each other, but also Braven's past offerings – the same metal grate graces both the front and back of each. The controls – power, phone, play/pause, volume up, and volume down – are on top, and the full-size USB port, aux out, charging port, and battery gauge can be found on the right side. I would really like to have seen track navigation controls outside of play and pause, as it's often easier to just reach up and touch the speaker than to unlock my phone to change the track. Alas, this is just not the case.

Naturally, all of the buttons and ports are open and accessible on the 850, but they're all protected by the aforementioned rubber coating on the 855s. Either way, both units are built like tanks, though the 855s' splashproof coating and rubberized exterior do give it a bit of an edge in that category. 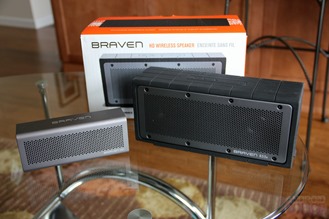 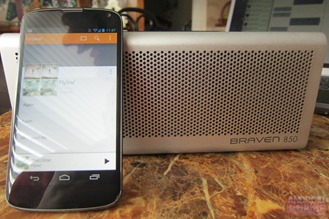 The Bluetooth speaker market is quickly becoming a crowded one, so manufacturers need to not only give their offerings something that makes them stand out in the crowd, but also price them accordingly. At $300, the Braven 850 and 855s are on the pricier side of the market, but the superb build and audio quality, and ability to use them as portable chargers make both an enticing buy, as long as you can get past the weight.

Ultimately, I think a portable Bluetooth speaker should actually be portable, which is why I'd elect to go a different direction. If you plan on using it around the house more often than on-the-go, however, it's hard to go wrong with the 855 or 855s.