It's been nine months to the day since Android 4.2 was announced, and just under four months since Samsung's first non-Nexus 4.2 devices started hitting the shelves. But apparently it takes at least that long to make sure that every non-touch gesture and gyroscopic scrolling function works with a new version of Android. Case in point: both the Galaxy Tab 2 7.0 WiFi (GT-P3110) in the UK and the Galaxy Note 8.0 3G (GT-N5100) in Germany are just now getting updated, according to SamMobile. 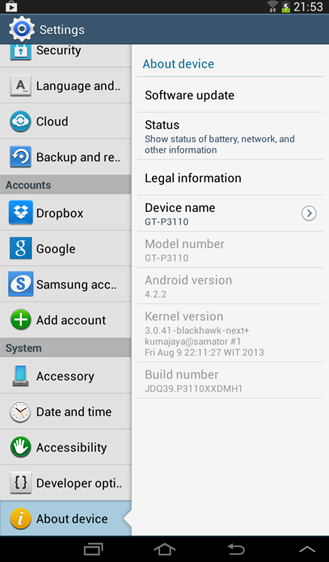 The 4.2.2 update for Samsung's tablets has been kind of sporadic. Before now we've seen the Galaxy Note 8.0 LTE version get it in the UK, with the 3G version of the Galaxy Tab 2 7.0 updated in France. There doesn't seem to be a lot of rhyme or reason to the location or time for these particular software updates. All four of these tablets were previously running Samsung's special blend of 4.1 and TouchWiz. You know the drill: if you've got the magic combination of device and location, head to your Settings menu to check for an over-the-air download.

If you'd rather not wait for a rolling update, SamMobile has done you a favor and posted both of the updates in their Firmware section. (The files are predictably huge, and you'll need to create an account to access them.) There's probably no harm in flashing them via Kies if you're outside the respective territories, though it's definitely safer to wait for the official update.

Sensoria Smart Sock Hits Goal On Indiegogo – A Fitness Tracker That Knows When You Suck At ...

JBL Charge Bluetooth Speaker Review: A Great Speaker Gets Better (In Some Ways), But Is It ...