I love the JBL Flip. The JBL Charge is the follow-up, of sorts, to that speaker, and addresses a few of the shortcomings its predecessor had. No more proprietary charging. Much longer battery life. A USB port for charging your various gadgets. It's also louder, and feels just as robust as the already-solid Flip.

The Flip's real selling point, though, is value. I simply don't believe there's a small, portable Bluetooth speaker on the market that makes a better value proposition than the Flip. One Flip sounds as good as two Jamboxes at half the price. Hell, that should be their entire marketing campaign. I've used more small portable BT speakers that are pricier than the Flip and sound worse than I have that sound noticeably better. The closest competition I've seen for the Flip is the UE Mobile Boombox, which I find tops out at too low a volume to be a true match for the Flip. 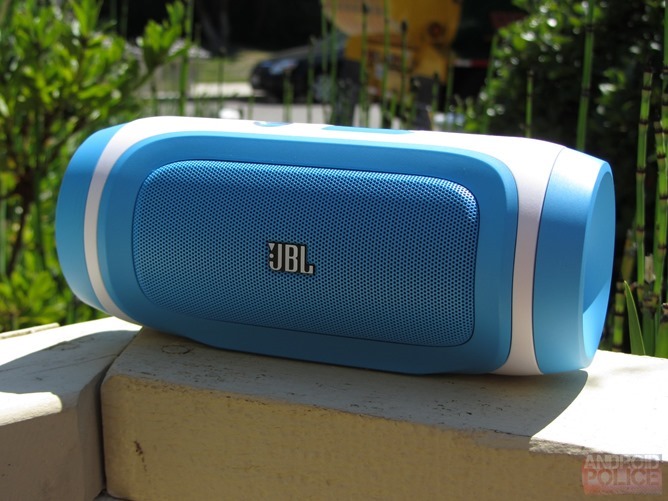 As such, I have very high expectations for the Charge. The good news is that it fixes my two main gripes about the Flip, those being the aforementioned battery life and proprietary charging. The Charge's potential problem is price. At $150, it's a full 50% more expensive than the Flip. Is it 50% better?*

*Note: MSRP is actually $170, but I don't think it even sold for that much the day it came out, and CamelCamelCamel agrees.

I like the look of the Charge. The Charge is much more in-your-face and bold than the Flip, with deep cutouts, sweeping curves, and highly visible seams all across its pill-shaped body. I really like it in this light blue. Your mileage may vary - I read quite a few reviews that expressed disappointment with the Charge's decidedly aggressive aesthetics. I personally think portable Bluetooth speakers should be a bit eccentric-looking - they're far from highly refined, audiophile products. But I wouldn't say the Flip is boring, either, and I'm honestly not sure which I prefer. JBL did a pretty good job on both, though they definitely come from pretty different ends of the design spectrum. 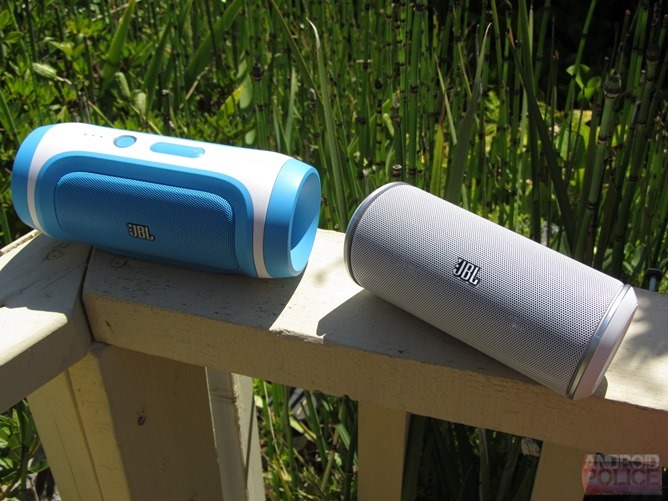 The buttons on the Charge have been positioned on top of the speaker, and by top, I mean if you have it laying flat on its rubber feet. I prefer this button placement to the Flip's. It's easier to adjust the volume or turn on the Charge if it's just sitting next to my bed, on the bathroom counter, or at my desk. This does mean, though, that if you put the Charge on its side (standing vertically), the controls will require you to actually grab the speaker in order to be used. Granted, the number of times you'll use them is few anyway, as I assume most people prefer to adjust volume on the paired streaming device as opposed to the speaker itself. The Charge also has a remaining battery indicator with 3 small lights showing how much juice is left. Handy! 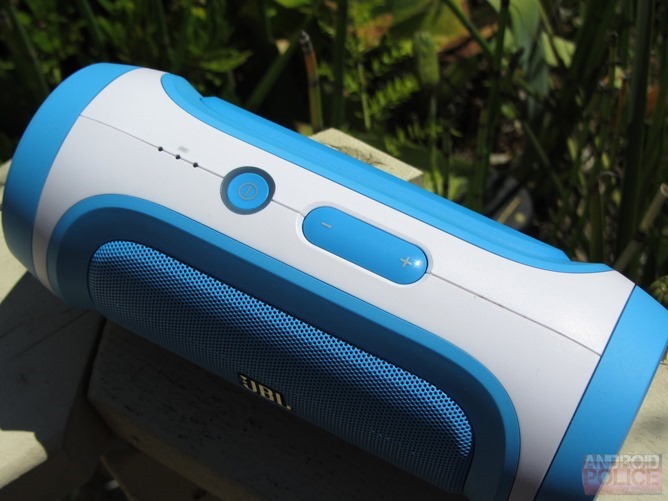 You'll find the charging and aux-in ports on the back in the same location as the Flip, though the Charge has obviously shed the dated, annoying proprietary AC charger in favor of microUSB. The end closer to the battery indicator lights has a small cover which can be opened to reveal a full-sized USB port capable of providing power to your stuff. On the opposite end is a bass reflex port that allows more low-frequency sound to boom out of the Charge, rather than get lost inside it as useless vibration.

I've read that the Charge feels "cheaper" than the Flip. I disagree. They feel roughly as well-constructed. I think the Flip seems more solid than it really is because of the big metal grille that wraps around the majority of its surface area, whereas the Charge is largely defined by its heavy-duty plastic body. Both creak and snap when put under stress, though neither feels particularly fragile. I wouldn't be terribly afraid of dropping them is what I'm saying, I guess, but also that they're not master classes in consumer electronics build quality. 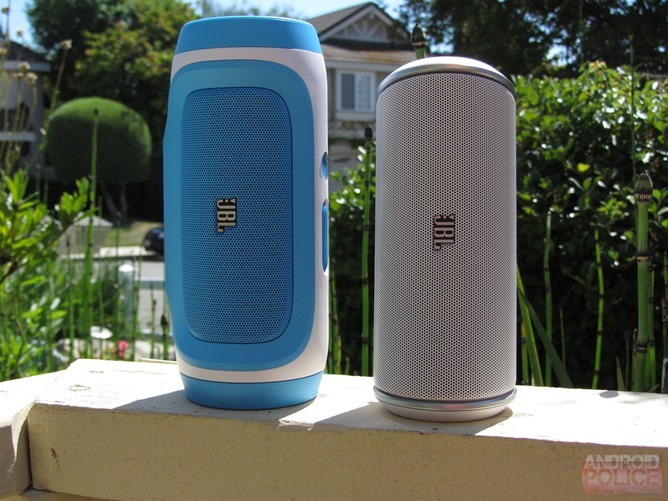 The other thing about the Charge is that it's bigger. Substantially. In circumference (it's roughly circular), it's about an inch larger, and it's an inch or so longer. This makes it, admittedly just a little, less portable. I guess they had to find room for that bigger battery somehow.

Speaking of that battery, it really does last a long time, and the standby life is outstanding. I topped up the Charge when I got it and have not yet had to plug it back in. I imagine I've got about 5 or 6 hours of play time on it now, and it's still showing two lights out of three on the charge indicator. JBL claims 10-12 hours of play time, and I'm inclined to believe them.

This is where the Charge loses me. When I first heard it in a quiet room without having the Flip to compare to, I thought "wow, that sounds great!" Now that I have it side by side with the Flip and some listening hours under my belt? Not so much. I hate to say it, but I actually think the Charge sounds worse. That's not an easy call to make, but it's the one my gut is telling me to make here. Let me explain. 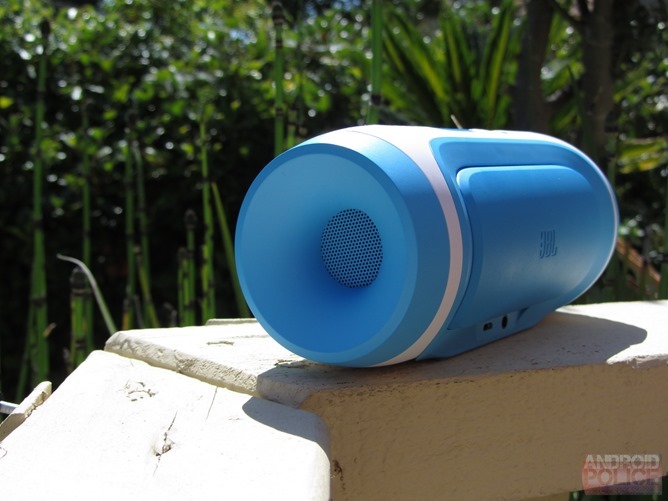 The Charge does have more bass presence than the Flip - noticeably so. But when you get both of them cranking at 80%+ of their maximum volume, that bass doesn't matter. You can't hear it anymore. It's irrelevant, for all intents and purposes. At lower volumes the Charge does sound a bit more boom-y, but the difference isn't extraordinary. There is bass, but it's not like it's going to drop your jaw. It's nice to have, but also really doesn't do a whole lot to enhance the listening experience in most situations, in my opinion. Really bass-heavy music sounds crappy on a small Bluetooth speaker, I don't care what speaker it is. A big part of loudspeaker sound quality lies in acoustics, and acoustics are about materials and space. Something the size of a Guinness pint can and made of plastic is not a good starting point, in that sense.

The shape of the Charge also seems to make it sound much more directional than the Flip. When lain flat on its rubber feet, the Charge's drivers point directly forward, whereas the Flip's are angled upward slightly, which I think gives it a more wide-open sound stage. The small grille through which the Charge pushes its sound also seems to make for a more stifled, narrow listening experience. It doesn't feel as warm or open, not that the Flip is what I'd call amazing in that sense - it's just pretty good. The loss of acoustic space to batteries may also be to blame here.

To compensate, the Charge feels much more tuned than the Flip does. Highs and lows are strongly punctuated, in an effort to reduce the sense that the sound is less "full." This does give the Charge something of an advantage in ultra high-volume scenarios, particularly when it comes to pop / electronica. Because the sound signature is tuned the way it is, there may be a greater perceived "dynamic" quality to the Charge in some (noisy) situations. But for simple, casual listening (eg, jazz, indie, classical) at your desk or on the couch? I prefer the Flip's more natural, open quality. 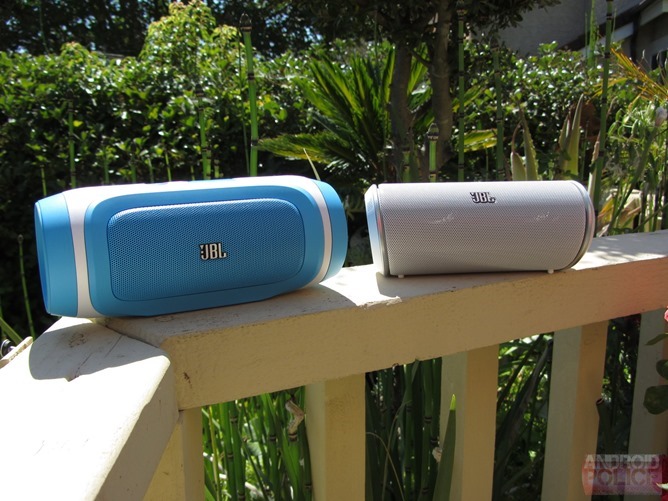 The JBL Charge does solve two of the big problems many people had with the Flip. The addition of microUSB charging and a much, much larger battery make it better-suited to compete with the premium segment of the Bluetooth speaker market. Accessory charging is an added bonus. And I can't deny the increased utility, it's a substantial improvement from the Flip in that sense (apart from the removed speakerphone functionality).

For you, the Charge may press the right buttons. It does most of what the Flip did right and more. You just have to shell out an extra fifty bucks for the privilege. But it just doesn't feel worth it to me. Once you're willing to say "OK, it's just 50 more dollars," you're not really looking for a bargain anymore, and that to me is what makes the Flip so appealing. If you're willing to spend more to get more, you're looking for a product that meets a set of needs more than one that fits a budget. And at that point it becomes much harder to recommend the Charge.

For just another fifty dollars, you can get the UE Boom, which by all accounts sounds better, lasts longer, is waterproof, and even supports multi-speaker pairing (granted, it does not have a USB accessory port). Or there's the Bose SoundLink Mini, which apparently sounds outstanding, and isn't a half-bad deal for a Bose product, also costing $200.

With the premium competition considered, the Charge feels out of place to me. At $99, the Flip made an outstanding argument for sheer value. At $150, the Charge seems like the middle ground no one asked for. If it were my money, and I was looking for premium features and decent value, I'm going the extra mile for the Boom or the SoundLink Mini. It doesn't make sense not to, you're already three quarters of the way there. And if I'm simply looking for the least amount I can spend and be happy, I'm going for the Flip.

The JBL Charge isn't bad, it just doesn't make much sense once you've considered the alternatives. 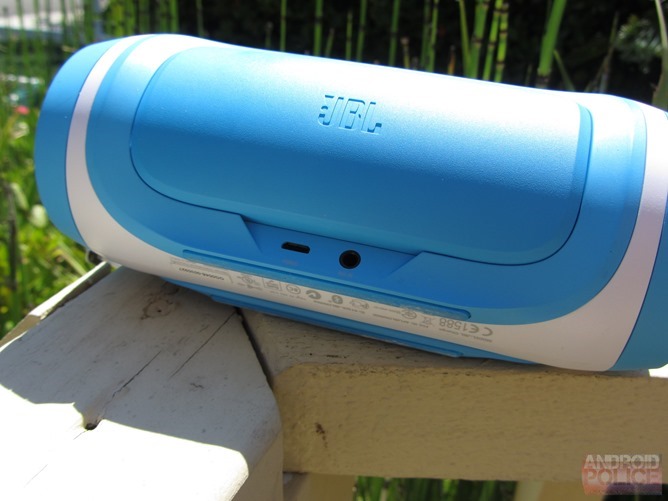 CyanogenMod 10.2 (Android 4.3) Nightly ROMs Are Rolling Out For Some Devices, Including The ...