Note from Artem: Mark Murphy, also known as CommonsWare and CommonsGuy, is one of the top 10 contributors to StackOverflow (he's currently #8). He's the Chuck Norris of Android development, with over 300,000 StackOverflow reputation points. I am honored by his decision to accept my offer to join the AndroidPolice team of contributors.

The User Defense series of posts will highlight relatively easy ways in which users can improve the privacy and security of their use of Android devices.

People sometimes worry about so-called "tracking cookies" that allow marketers to effectively spy on their Web surfing. Your smartphone is more or less a tracking cookie for the physical world, with everything from shopping malls to recycling bins tracking your movements.

Needless to say, some find this to be unnerving. Switching to airplane mode, or turning off your phone, in theory will stop this tracking. However, turning a phone off and on is rather slow, and there are concerns over whether everything truly shuts off in either case.

The OFF Pocket tries to address this.

Just as RFID-blocking wallets are designed to help secure your credit cards and such, accessories like the OFF Pocket aim to do the same for your smartphone. Simply sliding the phone into the OFF Pocket's sleeve is supposed to block all signals: WiFi, cellular, and GPS. 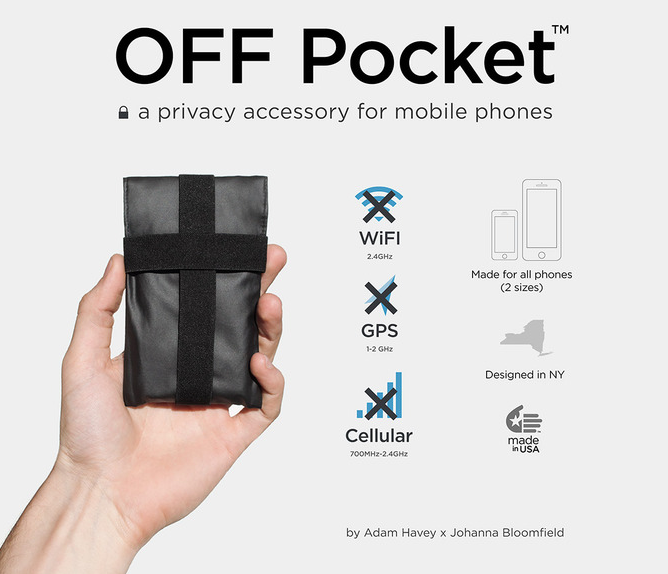 The OFF Pocket, like many new accessories, is coming from a Kickstarter campaign, led by designers with past experience in anti-surveillance products, such as the anti-drone hoodie.

The OFF Pocket campaign has already met its funding goal of $35,000, with two weeks to go.

The makers of the OFF Pocket claim 100dB drop in signal strength (translation: it blocks signals really well), and it is certainly more convenient than carrying around a cocktail shaker or refrigerator for shielding your phone. On the other hand, it would be nice if there were a bit more independent testing of these claims, as at $85 for new Kickstarter backers, it is not inexpensive. With the right apps, it would be possible for a buyer to make some basic confirmations about signal strength as seen by the pocketed device, but, of course, that would be after the OFF Pocket was purchased.

The OFF Pocket will come in two sizes, with the larger size being suitable for a wide range of Android phones, though it's unclear if it will be large enough for phablets like the Samsung Galaxy Note series.

The OFF Pocket is not the first product of its kind, as Disklabs Faraday Bags, among others, has had similar products for a while, making similar claims. However, the OFF Pocket happens to be arriving on the scene at an interesting time.

Ideally, these sorts of accessories would not be needed. That being said, the OFF Pocket and similar products should offer device owners greater control over when their device is visible to the world and, therefore, subject to tracking.