There may be a new Nexus 10 coming, but that doesn't make last year's Samsung tablet any less impressive. If you've had your eye on the 32GB version of Google's biggest, fanciest Nexus, eBay has a deal for you: $130 and just over 25% off the retail price. Yup, the 32GB Nexus 10 is on sale right now for $369.99, which is $30 cheaper than even the 16GB version in the Google Play Store. 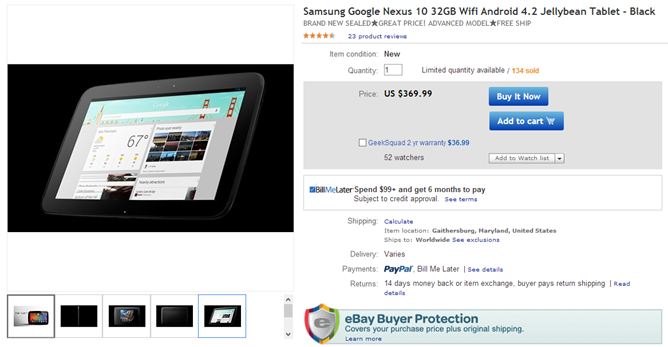 This isn't a refurbished or restocked model, as often seen on the featured Daily Deals. According to the description, it's brand new and sealed. USPS economy shipping to the United States is free, but can be upgraded to better USPS packages or UPS second day air. US shoppers should be able to avoid sales tax unless they live in Maryland. And by the way, international readers: the item is marked as "shipping worldwide." There's a lengthy list of excluded countries (India, Russia, Ukraine, and most of Africa, Southeast Asia, the Middle East, and the Caribbean) which you can read in the Shipping section, but hey, at least it's not totally exclusive to the US, right?

This deal beats eBay's previous sale price on the Nexus 10 32GB by $30. As usual with eBay's Daily Deals, the price is good only for today, August 10th, and the price is limited to the stock on hand. More than 150 tablets have already been sold, so if you want to take advantage of this price, get your order in quickly.

How To: Restore Your 2013 Nexus 7 Back To Stock Using A Full Factory Image And Root It