Welcome to the latest entry in our Bonus Round series, wherein we tell you all about the new Android games of the day that we couldn't get to during our regular news rounds. Consider this a quick update for the dedicated gamers who can't wait for our bi-weekly roundups, and don't want to wade through a whole day's worth of news just to get their pixelated fix. Today we've got a multiplayer strategy RPG, a new take on Mario Bros, a tower defense-strategy game that crosses over into the real word, and a 2D Wipeout-style throwback. Without further ado:

Champs: Battlegrounds takes traditional tactical RPGs and gives them a new lease on life with real-time combat. You'll still have to make strategic use of your forces, adapting to the environment and selectively using special moves to bring the enemy to heel. Or paw. Whatever. A full single-player mode and multiplayer battles are included, but beware of the free-to-play, pay-to-win curse when venturing online.

Lead your squad to victory in Champs: Battlegrounds, an action-packed squad based strategy game with fast-paced real-time combat. Choose your Champs, build your squad, battle through the campaign or challenge other players, and upgrade your army with more powerful Champs. Make every move count, as the decisions you make in the heat of battle have the potential to determine victory or defeat.

It's a long time since I've seen a good Mario Bros revival (no, not that Mario, this Mario). Gentlemen! is what might happen if Nintendo threw out its own 30-year-old rulebook and gave the brothers a new Victorian-era wardrobe. This two-player battle game is intended for a single tablet with opposing players, with the blue and red characters zipping around the platform stages like bolts of lightning in three-piece suits. Plus, there's a pigeon with a top hat. Buy it now.

2 Players, One Screen: Gentlemen! A Victorian era head-to-head arcade battle for tablets - 7 inches and up! Take on your friends in this frantically paced duel game. Knives, bombs, homing pigeons - choose your weapon wisely, and master the art of the gravity flip. An honorable duel, a dapper delight - GENTLEMEN! You'll need to hone a delicate balance of technique, knowledge, cunning, and blind panic (just like a real duel!). You'll also need a friend - two players, one screen. If you don't have a friend, go and get one. 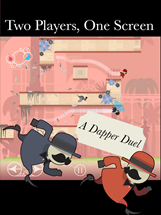 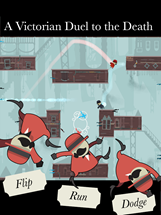 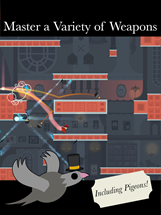 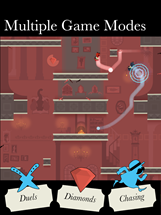 There have been quite a few tower defense games that try to up the ante with real-time strategy elements. Friendly Fire! takes the base-building approach with a new twist: your bases are built on real maps, or at least, procedurally-generated game boards based on real maps. You can set up your base anywhere in the world, but unfortunately, multiplayer is limited to a leaderboard system at the moment.

Defend your nation and destroy your rivals! Build an army, fortify your base, and conquer the world! Welcome to Friendly Fire! As Commander, it's your job to build a formidable army and become a force to be reckoned with. Your success will secure your position as the world's greatest superpower - become the envy of your friends and the bane of your enemies. Unleash tanks, artillery, and airborne assaults to crush all those who stand in your way. 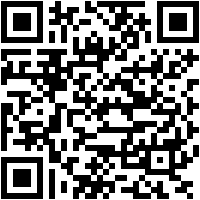 If you recall your high school physics lectures, you know that Delta-V is shorthand for change in velocity. While the spaceships in this game don't go all that fast, the 2D, 90-degree shift of perspective is a nice mix of Wipeout and R-Type. You'll have to navigate the scrolling stages and avoid the pursuit of your fellow racers to make it through a single race, then use your winnings to buy new ships, so you can hit them back on the next one.

Snake your way through the galaxy’s finest race tracks, and charge to victory in some of the coolest ships known to man. Quick thinking and faster reactions are the order of the day. Race tactically; throw off homing missiles with decoy mines or risk the tight fast route to pull a chain-boosted lead then claim your victory from the tournament BOSS as you take him out with a Laser blast… Can you take your place at the top podium on every event and become a true Delta-V Legend?