The flick-gesture for quickly opening the camera app on the Moto X and new DROIDs has been repeatedly highlighted by Motorola. And like any buzz-worthy feature in an upcoming phone, it's been almost immediately duplicated. Twisty Launcher popped into the Play Store last night, promising to deliver a customized version of this gesture-based feature, with the added benefit of being compatible with any device or app. 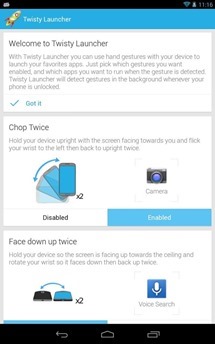 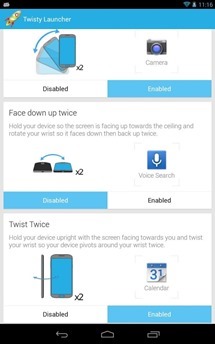 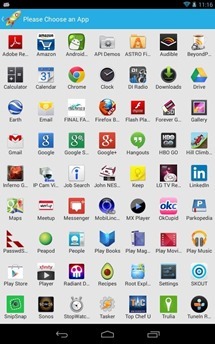 The name "launcher" is a bit of a misnomer - Twisty launches apps, but it isn't a homescreen in any way. Select an app to open with a gesture (the camera is enabled by default) and it will run in the background, waiting for your to call upon the mighty power of waiving your phone around. The main gesture is the "chop," which you activate by quickly rocking your device from portrait to landscape twice. Some short experiments on my own phone show that it's pretty reliable; even a gentle tilt will open the assigned app.

Twisty Launcher is free to download, but to select a custom app you'll need to pony up a dollar as an in-app purchase. That will also open up two more gestures, a sort of "barrel roll" motion and a perpendicular flip, which can likewise be assigned to any app. It looks like Twisty could use a little refinement: it's using an inordinate amount of battery life on my phone compared to other apps, and there needs to be a sensitivity setting and a function to disable the gestures temporarily for situations where you're moving around a lot, like in a racing game with tilt controls. 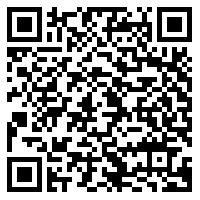 Music Player (Remix) Puts Other Music Apps To Shame With A Laundry List Of Features And A ...

[New Game] S.M.T.H. Invites You To Kill Your Phone In Pursuit Of Victory, But You Should ...