Update: Clove has posted the full details on the HTC Fetch to its blog, and it's a lot less interesting than they previously thought. Turns out it's just a Bluetooth-enabled tracker device, with no on-board GPS function. When it's paired to an HTC phone (presumably through an app) it will beep on command, helping you find your keys and whatnot.

If you can't hear it, it will report on its location... but that depends upon the GPS function in your phone for its last known location. If the item in question is truly lost, and not reachable via the ~40 foot Bluetooth range, it stays lost. Phooey.

The HTC Fetch runs on a single CR2032 battery, and includes a remote camera shutter button, not unlike the Muku Shuttr. There's no word on when or if it will make it to the US or other markets.

We've been scratching our heads about the "HTC Fetch" ever since we saw it pop up in a trademark application earlier this year: the brief Justia description sounded more like an accessory than a phone. Today the Fetch BL-A100 showed up for preorder on UK retailer Clove, with a tiny image and a pretty conclusive description. It's a GPS-enabled tracking tag, designed to let you keep track of your stuff via your smartphone. 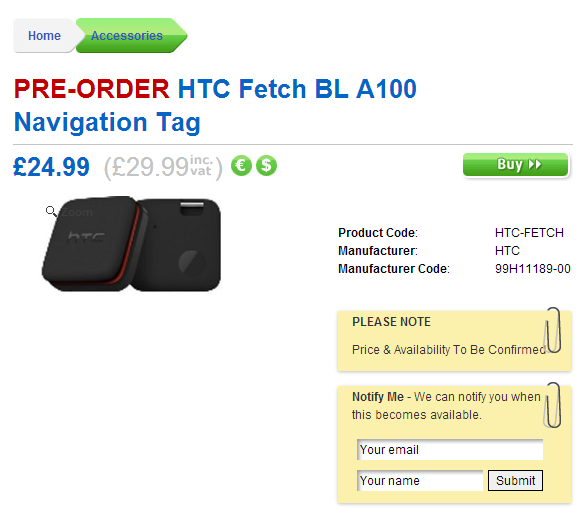 Of course, there are still a few questions that need to be answered. We asked Clove about the HTC Fetch, and they told us what they could:

We are still waiting on information from HTC but we believe the Fetch will be a portable GPS unit which can be tracked via a website and companion application on your device.

This isn't the first time we've seen a real life "where's my stuff?" gadget, but most of the other tags have had local functionality only: NFC tags that connect to a short-range base station and beep when triggered, for example. The Fetch's combination of low price (£24.99, just under $40 USD), small size, and smartphone functionality could make it a game changer. Get one for your keys, one for your luggage, one for your kid's backpack, and one for your dog's collar, and you could have a lot more peace of mind via a simple smartphone app.

The BL-100 tag obviously implies a Bluetooth connection. Can Fetch work worldwide? Will it require an HTC smartphone? When will it become available? How much will it sell for in other territories? (The UK tends to have a pretty punishing exchange rate - $25 USD is a reasonable expectation.) We can't wait to find out.

5.9-Inch HTC One Max, AKA T6, Shown In Leaked Photo: Looks Like A Gigantic HTC One

[Deal Alert] Office Max Coupon Entitles You To 20% Off Tablets Like The New Nexus 7, But Only ...