For the couple of years, Samsung's cheaper, smaller handsets have been sold mostly on America's small regional carriers. It looks like Verizon is bucking that trend by bringing the Galaxy S4 Mini, a phone that's related to is big brother in name only, to US consumers. Engadget was tipped with some photos and screenshots of the phone "in the wild," with a pretty convincing set of Verizon logos and a boot-up sequence. 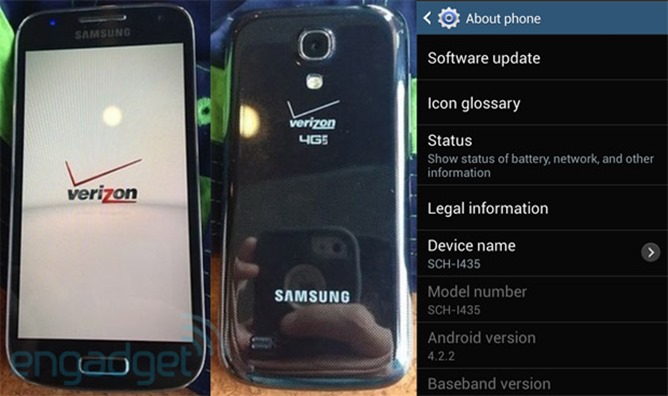 This isn't the first we've heard of a Verizon S4 mini: BlogOfMobile predicted a Verizon model back in June, using the same SCH-i435 model number on display above. This Verizon version seems to come in black, and if you're wondering, the combination of a smaller case and a 4.3" screen makes the Galaxy S4 Mini roughly the same size as the Motorola DROID RAZR M or iPhone 5.

If you're hoping to get the Galaxy S4's impressive specs in a smaller package, keep looking. The international version of the S4 Mini uses a qHD (960x540) Super AMOLED screen, a measly 8GB of storage (5GB accessible), and an 8MP rear camera. 1.5GB of RAM and an open MicroSD card slot are a little easier to swallow, as is the 1.7Ghz dual-core processor (though the CDMA-LTE version may be different in this respect) and the user-replaceable battery. Buttons and case style ape the S4, and the phone runs Samsung's TouchWiz version of Android 4.2.2.

Verizon hasn't said anything official about the Galaxy S4 Mini, but those photos look like a phone that's very close to a retail release. It will be interesting to see how Verizon prices the S4 Mini, especially considering the new and generally more powerful DROID Mini coming out later this month for $100 on-contract.