It's that time of the month: get your paycheck, pay your bills, and gather round the Android Developers page for a new look at the distributed versions of the world's most-used mobile operating system. For the two-week period ending on August 1st, Jelly Bean 4.1 rose 1.7% to 34% of the total Android population, becoming the most popular single version of Android for the first time. 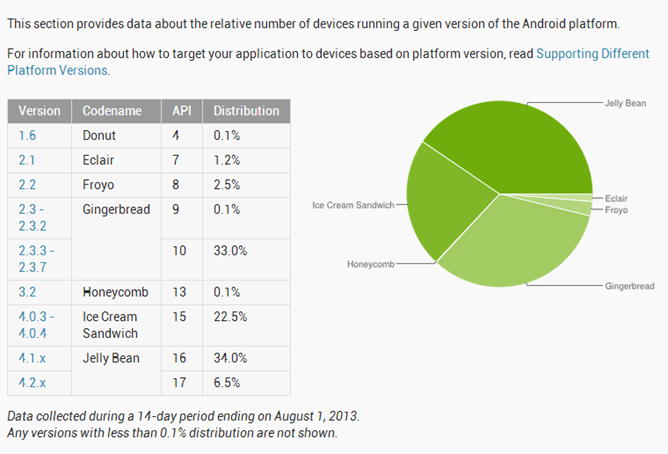 The rest of the platform changed very little since July. Jelly Bean 4.2 rose just under 1% to 6.5% of total units, with the Galaxy S4, HTC One and various Nexus devices likely driving that small growth. Combined Jelly Bean installs now account for four out of every ten Android devices, but one week of availability for 4.3 was not apparently enough to shift the scales. Ice Cream Sandwich is still holding steady at 22.5%, a .8% drop, and 2.3 Gingerbread lost just 1.1% to drop to almost exactly one-third of Android devices, proving depressingly tenacious two and a half years after its introduction.

The rest of the Android versions account for less than 3%% of installs between them. 1.6 Donut still clings to life with .1%, the same as 3.0 Honeycomb, with 2.1 Éclair accounting for 1.6% of installs and 2.2 Froyo roughly double that at 2.5%. There are no big surprises here - everything is continuing slowly as it has been for the last few months. We should see Android 4.3 pop into the chart in early September, albeit in a miniscule way.

Google also included a developer-friendly chart for screen densities, showing that more than 80% of Android devices use a combination of screen size and resolution that falls within Android's "normal" range (roughly 240DPI, give or take). Android 4.3 introduced support for XXXHDPI, supporting screens roughly twice as dense as high-end devices like the HTC One and Nexus 10. 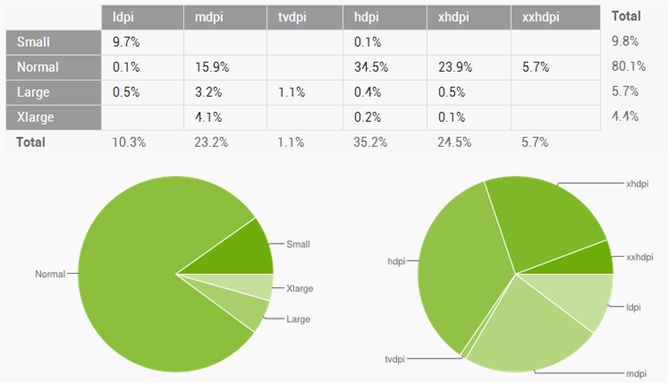 [Bonus Round] Hero Forge, Choplifter HD, Suspect In Sight, A Ride Into The Mountains, And ...