Perhaps Google Reader's largest advantage wasn't its features, usability, or ubiquity - it was Google's massive resources. The Old Reader was one of many alternatives that readers fled to in advance of Reader's imminent collapse, and its users swelled by over 1000 percent in just a week. Now, after having swelled from 10 thousand users to over 400 thousand, the developers are saying that enough is enough. They currently plan to re-launch The Old Reader as a private service and only invite back those who joined before the flood, but they're still open to alternatives that would ensure continued public access. 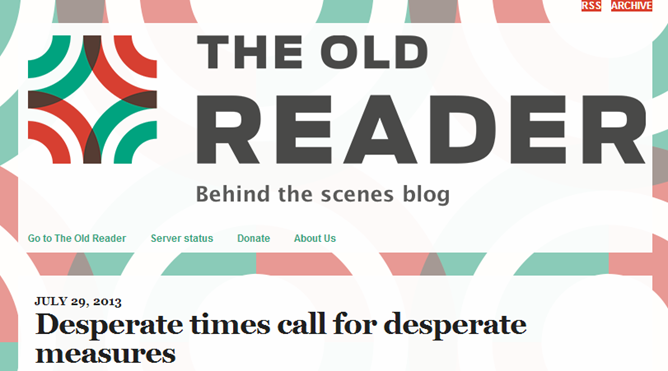 The developers originally viewed The Old Reader as a labor of love. It was not supposed to be a job or business, but the time commitment of supporting over 400 thousand users has turned it into one, and it has stripped the team of their personal lives.

The truth is, during last 5 months we have had no work life balance at all. The “life” variable was out of equation: you can limit hours, make up rules on time management, but this isn’t going to work if you’re running a project for hundreds of thousands of people. Let me tell you why: it tears us to bits if something is not working right, and we are doing everything we can to fix that. We can’t ignore an error message, a broken RAID array, or unanswered email. I personally spent my own first wedding anniversary fixing the migration last Sunday. Talk about “laid back” attitude now. And I won’t even start describing enormous sentimental attachment to The Old Reader that we have.

We would really like to switch the difficulty level back to “normal”. Not to be dreaded of a vacation. Do something else besides The Old Reader. Stop neglecting ourselves. Think of other projects. Get less distant from families and loved ones. The last part it’s the worst: when you are with your family, you can’t fall out of dialogues, nodding, smiling and responding something irrelevant while thinking of refactoring the backend, checking Graphite dashboard, glancing onto a Skype chat and replying on Twitter. You really need to be there, you need to be completely involved. We want to have this experience again.

That’s why The Old Reader has to change. We have closed user registration, and we plan to shut the public site down in two weeks. We started working on this project for ourselves and our friends, and we use The Old Reader on a daily basis, so we will launch a separate private site that will keep running. It will have faster refresh rate, more posts per feed, and properly working full-text search — we are sure that we can provide all this at a smaller scale without that much drama, just like we were doing before March.

Anyone who betted on The Old Reader isn't out of luck. There's still a wide range of alternatives out there, including Feedly, TinyTinyRSS, and NewsBlur. Even if The Old Reader does maintain public access going forward, it may still be prudent to switch to a platform whose future is more stable.

Via: The Digital Reader

Aviate Launcher Review: One Of The Most Powerful Alpha Products I've Ever Used