Catch.com, a well-known multi-platform note-taking service, is shutting its doors on August 30th. The company began giving notice of the decision to users on its site today, providing an option to export any notes before the service is taken offline. The associated Android app, Catch Notes, will presumably become non-functional on the 30th as well. 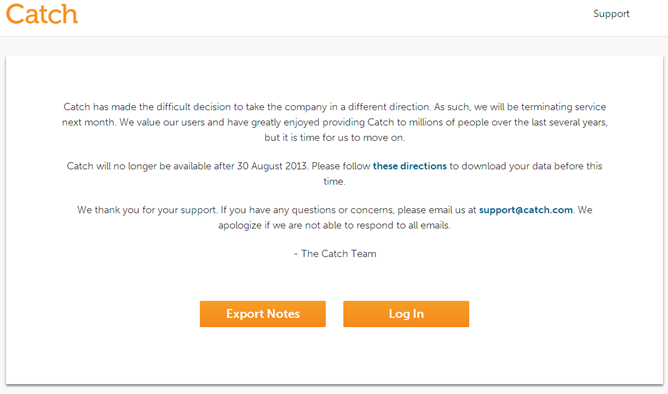 Catch had millions of users, and the Android app had amassed 5,000,000-10,000,000 installs in its tenure on the Play Store. Catch really doesn't provide much in the way of reasoning for the decision, stating only that the company will be moving in a "different direction" going forward.

With encroachment from Google with Keep and the continued popularity of Evernote, the note-taking space is quickly becoming a crowded one. Perhaps Catch simply didn't feel it could play catch-up any longer.

Smart IR Remote For Galaxy S4 And HTC One Is A TV Junkie's Wet Dream, But It Comes At A Premium ...