Call it too ambitious, ahead of its time, or just plain not a very good idea - it doesn't really matter at this point: former Canonical CEO Mark Shuttleworth's Ubuntu-powered smartphone crowdfunding campaign has all but fizzled at this point.

While the campaign achieved over 10% of its total funding goal in the first 24 hours of the campaign - a whopping $3.4 million, setting an Indiegogo record - progress slowed quickly as the week went on. After around 3 days, that number was just above $4 million, and as of this writing eight full days into the campaign, the figure sits at $7.4 million with 22 days remaining. 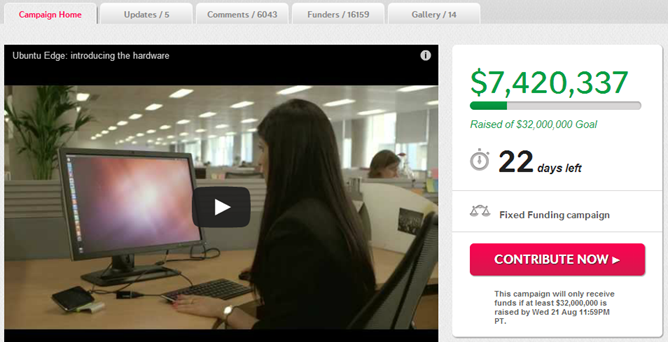 Sorry guys, it just isn't going to happen. Not unless something truly crazy transpires. Even if you average out the per day funding Edge has received to date, they'd still be a few million dollars short if they kept up this pace through the end of the campaign. And that's not going to be the case - it never is with projects like this. Crowdfunding campaigns with high initial public visibility - and I doubt you'll find one that got a lot more than Edge did - always start hot, with per day funding decreasing thereafter. Even if all of the fifty top-tier $80,000 Enterprise 100 bundles were purchased (none have been), the Edge still probably couldn't meet its goal by August 21st given the rapid decline of funding in the last few days.

The campaign received a temporary boost a few days ago when new tiers were added for, basically, donations at the $20 and $50 level ($50 even includes a shirt!), but it's hard to see the good will of the community pushing the Edge over... the edge.

Say what you will about how realistic an idea it was, its feasibility, or its credibility, you have to admit - it was ambitious. While this campaign will almost certainly fail to fund, one can hope the Edge concept might, at the least, inspire some new products.

Google Sending 'Invite A Friend' Emails To Some Glass Explorers