Though there's a definite streak among power users to prefer Google's "pure" Android on their phones, some of the manufacturer skins from HTC and Samsung have charming features as well. Modder and ROM developer Paul O'Brien, better known as MoDaCo, has been testing a solution to give you the best of both worlds. MoDaCo.SWITCH is a dual-boot solution for power users that lets two ROMs (manufacturer stock and AOSP, for example) which share user data, allowing a seamless switch between interfaces.

In the demo of the beta version above, the SWITCH feature is pretty seamless: start the SWITCH app and the phone reboots into its secondary Android OS, complete with apps, settings, files, and user data. This is easily the best dual-boot solution we've seen yet, since previous implementations were more or less like using two phones which happened to be housed in the same hardware. It should work between any custom ROMs - the above video shows HTC Sense and the Google Play Edition ROM for the HTC One, as included in the beta, but it could just as easily be AOSP and CyanogenMod.

MoDaCo's closed beta program for the HTC One has just ended, and is now in open beta. It's only officially supported on the international GSM version of the One (installing on other versions has not been formally tested, but some users have had success on US variants). For the beta version, you'll need to be rooted, with a custom recovery and preferably S-OFF as well. If you're got all that, the installation shouldn't be a problem for root and custom ROM veterans. 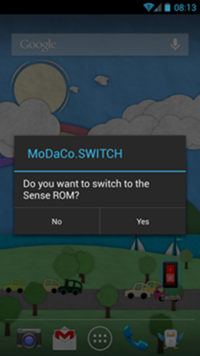 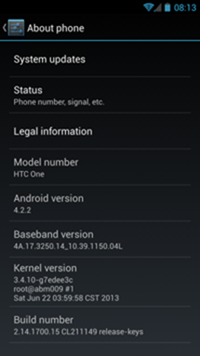 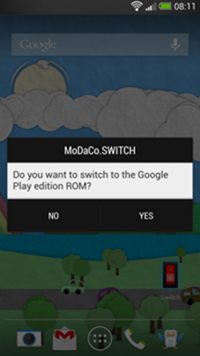 Right now the only supported device for SWITCH is the HTC One, but MoDaCo is planning to expand to the Samsung Galaxy S4 as well. The team has started an IndieGoGo campaign with an extremely reasonable £1,000 goal to raise some cash for a test device. Backers can donate as little as one pound (about a buck fifty) to help out, but higher donation levels get you early access to the SWITCH ROM, premium accounts for the MoDaCo forums, and T-shirts, among other things.

Dear HTC and Samsung: feel free to steal this idea any time.