If you've already updated to Android 4.3, whether via an OTA or by flashing it manually, and rooted it, you're more than likely using Chainfire's SuperSU, which carefully works around the new restrictions Google put in place. Cody has a good write-up about why they did it and what's going on, so go read that if you're interested in the details.

Chainfire created the Android 4.3-compatible root method and the updated SuperSU back when the first leaks showed up for the Galaxy S4 but hasn't updated it for a few weeks. During that time, a good portion of users have discovered that sometimes SuperSU causes CPU spikes and starts eating up 100% CPU. Today, Chainfire has finally fixed this bug (or at least the one he could reproduce) and released version 1.43 that everyone who had flashed 1.41 is encouraged to update to.

I've already updated all our guides referring to SuperSU for Android 4.3 with the link to this new version.

Note: Even though Chainfire updated SuperSU in the Play Store as well, you still need to flash from recovery using the method below.

The full changelog is as follows:

Updating is easy - just flash SuperSU 1.43 in recovery (I tried it in TWRP, which worked flawlessly): 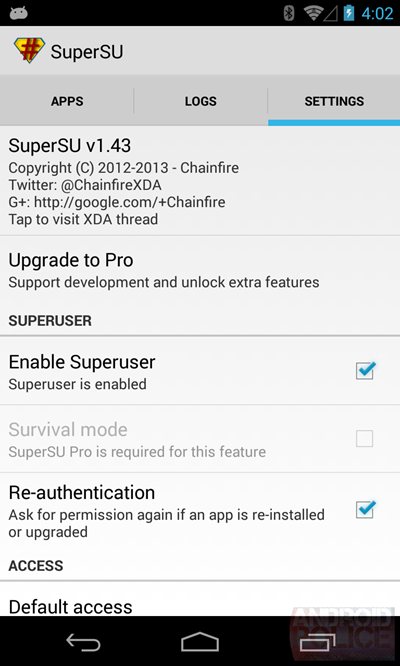 Jorrit Jongma, I mean Chainfire, keep up the excellent work. You, sir, are a magician in every sense of the word.

Google Has Already Ended The 3 Months Of Bundled Netflix Deal With Chromecast After Insane ...