This is definitely one of the highlights of today's Nexus 7 presentation for me: multi-network LTE support in one device. No mucking about with carrier-specific models. This is really great, assuming your carrier is supported.

The new Nexus 7, if you opt for the LTE model, will support LTE data connectivity on AT&T, Verizon, and T-Mobile. That's just kind of awesome. There are some potential caveats, though. Google did not elaborate on which frequencies were specifically supported, or if 3G support would be available on all three networks. 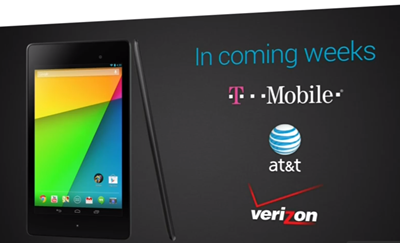 I have to assume it will, though, as I have not yet heard of any device on Verizon that connects only through the LTE network. 3G support is all but a given for AT&T's world-friendly frequencies, as is at least partial support for T-Mobile 3G where it has not already been re-farmed into LTE.

The 32GB Nexus 7 LTE model will cost $349 in the US, and it's not looking like it will launch alongside the Wi-Fi models on July 30th, but rather "in the coming weeks." For more about the newest member of the Nexus family, check out our announcement post.