As with some previous Verizon flagship devices, employees are being given a customized version of the new Motorola DROID Ultra. Well, "given" may be too strong a word - they get a reduced $99 price ($100 off) with a two-year contract. Verizon will also throw in some DROID-branded accessories, namely a free case and some SOL Republic JAX earbuds. Droid-Life spotted the Employee Edition, presumably on an internal store, set to ship on August 20th with the other DROIDs. 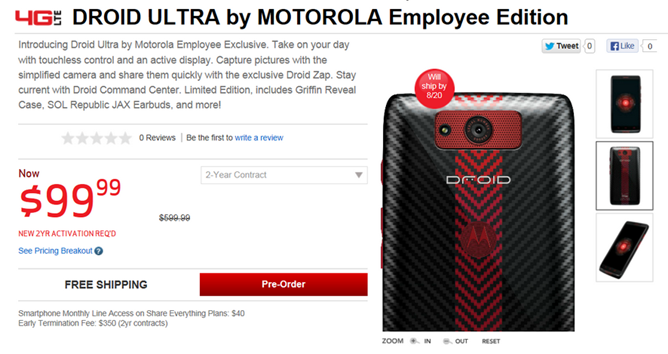 As seen in at least one leak, the cosmetic differences to this DROID Ultra are unique. Instead of the full black or red offered on the standard model, it has a "racing stripe" of black and red Kevlar down the back, complete with a red Motorola logo and camera module. It looks like the power and volume buttons are colored red as well. Opinions here at Android Police are divided, but I think it looks pretty swanky - if I worked at Verizon, I'd certainly pick one up. Too bad they don't get a break on that $599.99 off-contract price.

There's no way for non-Verizon employees to buy one, but these special editions do have a habit of showing up on Craigslist, eBay, and even the Android-specific Swappa.com from time to time. Those of you with friends or family behind the red curtain could probably get them to pick one up for you as well.

[New Game] Prince Of Persia Classic Sequel 'The Shadow And The Flame' Hits Google Play For $2.99