Following the announcement of Android 4.3, the new Nexus 7, and the Chromecast, Google just started pushing the Android 4.3 open source code to AOSP (Android Open Source Project) under the tag android-4.3_r2.1. The push began several minutes ago and is expected to complete within a few hours. Additionally, factory images are already available for the Nexus 4, 7, 10, and the Galaxy Nexus.

Update 11:04am: According to JBQ, the push is complete: "All the files have been replicated to the git servers. If something's not working at this point, it's a bug." 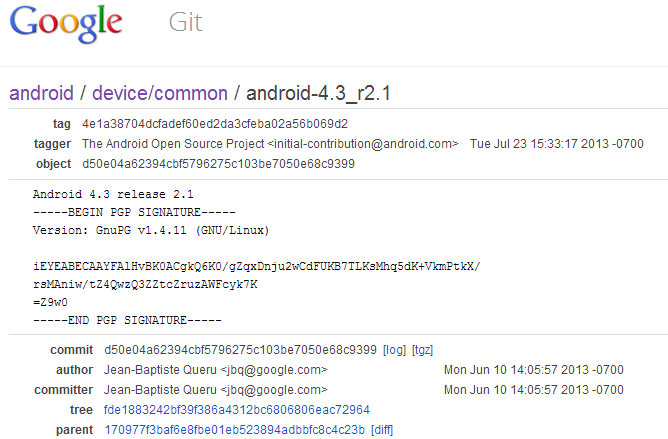 JBQ, our favorite release master, took the creative route to announce the AOSP push - have a read:

Google Airlines welcomes you on the ground in Android International Open Source Airport Project. The local time is exactly 4:30 pm. We will be taxiing for a few minutes to our gate JSS15J while ground support guides us to the public git server.

We hope that you had a pleasant flight and we welcome you to Jelly Bean, or that you have a conflict-free rebase while connecting to your final version.

Your source files will be delivered down the https://android.googlesource.com stairs, in hall jb-mr2-dev, on carousel android-4.3_r2.1. Oversize kernel source files will follow a few minutes later at the counter.

Customs forms are available at https://developers.google.com/android/nexus/drivers and need to be filled before starting a device build, even if this is not your first trip to Jelly Bean.

If you forgot to pack something in your luggage, pre-packed luggage is available at https://developers.google.com/android/nexus/images that contains everything you might need.

Should you have any questions, our agents are standing by at the android-building Google Group. Complaints and suggestions can be filed at http://b.android.com. Volunteers can head to the android-contrib Google Group, and job applicants to http://google.com/jobs

Even if you've visited Jelly Bean before, you will notice that our graphics public transportation is now smoother and more energy-efficient. The city is also safer for everyone, with an entire block dedicated to children. Location Hill was renovated, and the repaving of Bluetooth Avenue continued all the way to BTLE Street and AVRCP 1.3 Park. Our filesystem garbage collection service can now handle active households that generate a lot of trash.

On behalf of all of Google Airlines and of our Android ground crew, captain Conley and cabin chief JBQ wish you a pleasant experience with Android 4.3 and we hope to see you again soon.

Having such timely access to both AOSP source and the factory images is very refreshing and shows that at least this part of Google is now running like a well-oiled machine. Access to AOSP code means custom ROM development can begin immediately, and you should see the first 4.3 builds of your favorite ROMs show up soon.

Update #3: For those a bit confused on why we have JWR66V for current Nexus devices and JSS15J for the new Nexus 7, JBQ explains:

The JW builds were split early, to shield existing devices from the risk of destabilizations introduced by last-minute changes for the new devices.

[All Good Things...] The Original Nexus 7 Is No Longer For Sale In The Google Play Store