The Nexus 7 has been a solid little workhorse, but now that the next generation is in, it's time to put it out to pasture. The original Nexus tablet is no longer available for purchase in the U.S. This is just a bit surprising - I had expected Google to try and get the last bit of stock out with a closeout sale. The various pages for the 16GB and 32GB models plus the AT&T and T-Mobile 3G versions are still up, but there's no option to buy. Even the official ASUS dock is gone. 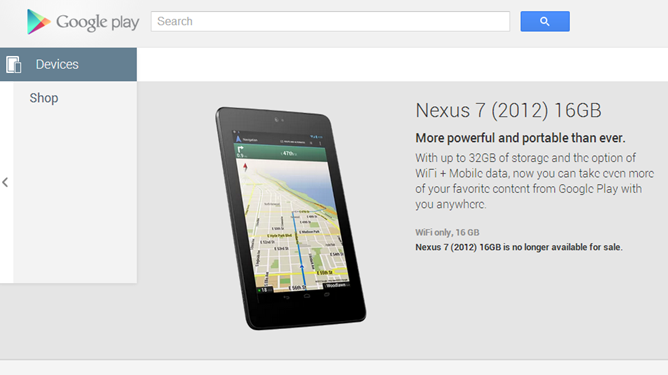 Of course, there are more than a few tablet users who aren't planning to upgrade, including yours truly. Don't worry, Google has already posted the updated Android 4.3 factory images for the OG Nexus 7 (among other Nexus tablets and phones) and over-the-air updates are sure to keep coming. Based on the fact that the Galaxy Nexus models (originally released with Android 4.0) are still being updated, I'd venture the opinion that the Nexus 7 has at least two more major Android revisions left before Google ends software support.

The new Nexus 7 is pretty alluring, thanks to a full HD screen, 2GB of RAM, and some very impressive LTE options. But if you're hunting for a deal, I'll bet that various online and brick-and-mortar stores will have the original one on clearance over the next month or so. As for the rest of you: pour a little out for the first official Nexus tablet.