It's that time of year: a new version of Android is in the wild. Here's everything we could find that's new and notable in Android Jelly Bean 4.3. Most of it is for developers and gives the software a bit of spit and polish, and at least some of the new features require fancy new hardware. But if you want to get a quick overview of all the new stuff coming to a Nexus near you (and hopefully other devices) soon, this is it.

Remember the way your old dumbphone (or perhaps your skinned Android phone) would auto-complete the numbers from your contact pool? Now Android 4.3 can do that natively. Took long enough. Google has also tweaked the keyboard for better tap recognition, and remote gamepads like the MOGA should have even less latency.

The most user-facing new feature in 4.3 is the ability to create restricted profiles. This builds on the multi-user implementation in Android 4.2 tablets (and only tablets) by allowing the tablet owner to designate which apps, services, and settings are available to restricted users. This is perfect for guests, kids, or retail kiosks. The accounts are still separated in terms of apps and storage, but owners can specify which apps can use the owner's identity or settings and which will require something else, or simply be disabled. Individual apps can restrict access to certain functionality (like location tracking or in-app purchases) at the API level. 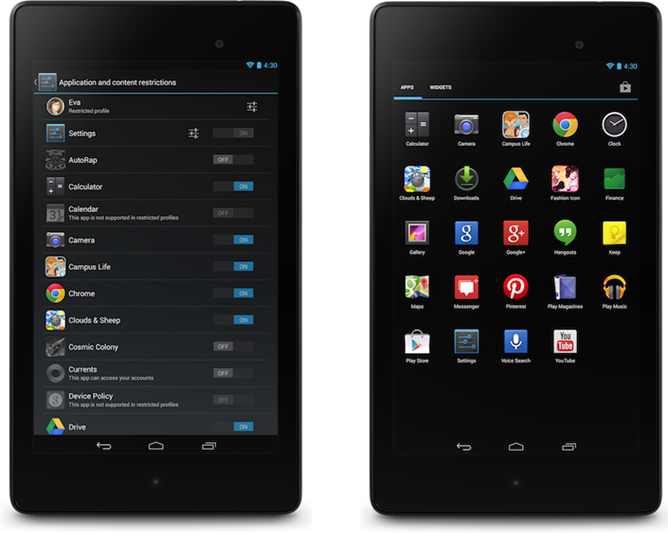 The Geofencing and Wi-Fi scanning APIs in the new Google Play services (revealed at Google I/O) now have system-level support on certain hardware, the new Nexus 7 and Nexus 4 being the only Google devices that are currently compatible. For example, the gyroscope and magnetometer can now report raw and ostensibly more accurate data to games and apps, and the WiFi scanning mode can be enabled without connecting to a network for better location tracking without using GPS.

4.3 gets a whole slew of new features for enterprise and other security-conscious users. Individual apps can now configure WiFi credentials on WPA2 networks, and exchange authentication with networks via the Extensible Authentication Protocol. The KeyChain API has a new method for application keys that can't be exported from a device, even in the event of a root compromise. There's a new keystore provider for creating security keys that can't be seen by other apps. Private keystore keys can't be exported. Finally, the /system partition is now mounted to prevent apps from executing setuid programs (closing some vulnerabilities) and Android now uses the SELinux mandatory access control system.

Ho boy, have there been a lot of new toys added to developer's toolboxes. First of all, there are a ton of new notification options, chiefly the ability for individual apps to be aware of system-wide notifications. This requires the permission of the end user, but the listening API delivers a rich amount of information including the originating app, time, content, priority, and dismissal state. There are new options for transparent overlays, custom rotation animations, on-the-fly orientation locking, and access to the new Quick Response text feature.

As mentioned in the Google livestream, Android 4.3 now supports new Bluetooth APIs including Bluetooth Low Energy (supported on the N7 2013 and Nexus 4) and Bluetooth Smart Ready devices, primarily designed for low-bandwidth applications. This is perfect for add-on devices like watches, remotes, et cetera, either as a client or a server. The AVRCP 1.3 profile (an expanded version of the old A2DP streaming/controlling function) is designed specifically for remote control clients, and will now allow for remote displaying of information like song titles and artists.

Android 4.3 now supports OpenGL ES 3.0, the latest version of the OpenGL API for mobile hardware and other low-power systems. 3.0 supports new options for shaders, texture compression, and other complex graphics in 2D and 3D. The new Android 4.3 builds for the Nexus 7 2013, Nexus 4, and Nexus 10 (scheduled to update over the air very soon) already support OpenGL ES 3.0.

This audio trick has been used for a quasi-surround effect from stereo headphones and speakers for years, and now it's available to Android devices with stereo speakers like the new Nexus 7. HTC, you can't update the One fast enough. It's not clear if this can be enabled with standard headphones.

Digital Rights Management is a bit of a dirty term, but it's a necessary evil if you want a wide array of content on your device. 4.3 includes an impressive assortment of new DRM implementations: MPEG DASH, VP8 encoding, surface encoding without a buffer, and combine video and audio file outputs via an MPEG-4 media muxer.

Also, extended software playback controls will now be able to access controls for speed and position. Translation: it should be possible to build music widgets and notification controls that let you scan through a song or track without opening the app. Nice. We've tried this with Google Play Music, but it doesn't seem to be implemented yet - be on the lookout for a new version in the Play Store soon. 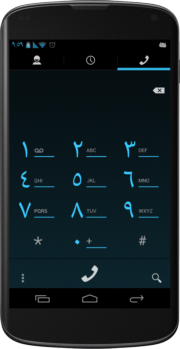 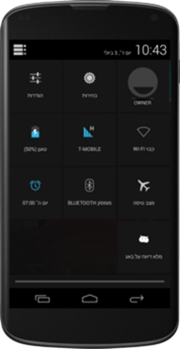 Developers now have access to an enhanced Systrace tool, which can bring in data from hardware modules, kernel functions, the Dalvik Virtual Machine, and resource loading. Trace APIs can mark sections of code for logging, saving some system resources. There's also a new visual indicator of GPU performance for debugging graphics-heavy apps. It's with a built-in indicator for drawing, issuing, and waiting on commands, with the green bar indicating a 60ms threshold for the frames per second goal. Check out the multi-threaded overlays below. 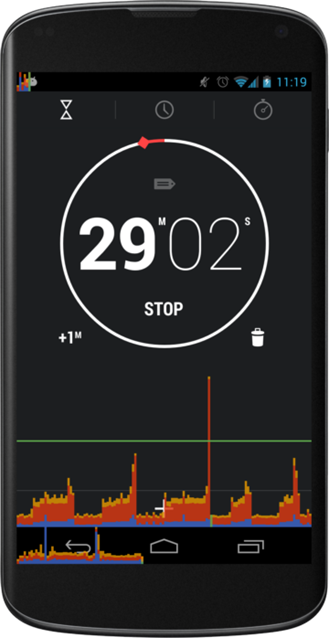 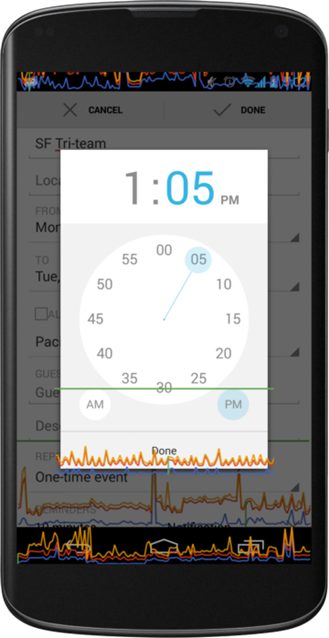 There's now a tab for disabled apps in the Settings menu, so you won't have to scroll all the way through the "All Apps" tab to see them. The initial Android Setup Wizard is a bit better, now that you can correct previous inputs and a bit of the EULA has been streamlined. User switching on tablets is faster, and the Photo Table daydream can now navigate through albums in addition to folders. Also, devs: there's a new ActionBarCompat function in Support Library 18 that makes it easy to mimic the Action Bar for phones running Android 2.1-3.0. 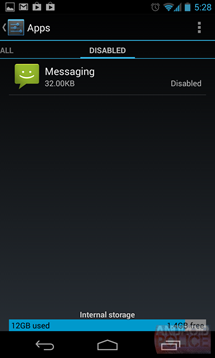 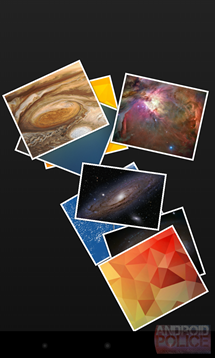 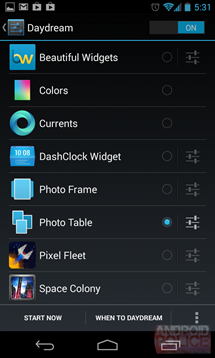 This is a (relatively) brief overview of all the new features. Naturally we'll be doing a more exhaustive look later. If you're a developer or just more technically-inclined, Google has an incredibly deep run-down of all the new SDK and API features.