Just as expected, Verizon revealed its new family of DROIDs today, courtesy of Motorola. The smallest is (naturally) the DROID MINI, entry-level counterpart to the big daddy Ultra and MAXX, and ostensible sequel to the excellent DROID RAZR M. The phone uses the same Kevlar-wrapped style as the larger phones, with the naturally updated hardware that you'd expect. It launches on August 20th for $99 on-contract, and pre-orders will be live today. 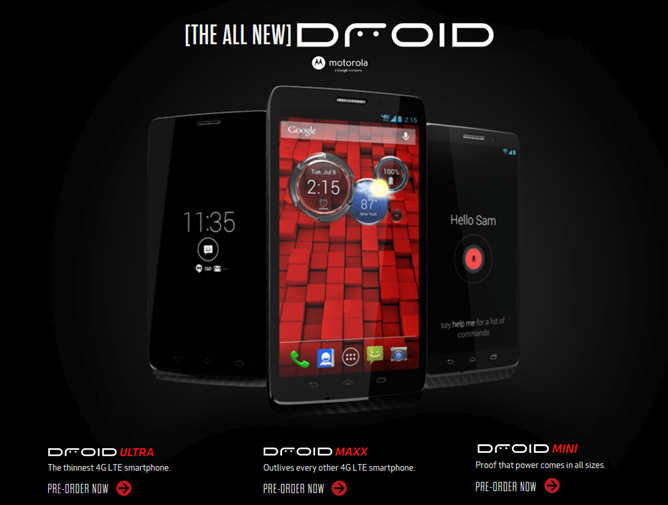 All three new phones use a Motorola-branded octocore system on a chip, the X8. (This may be a bit of a misnomer - a Verizon slide mentioned 2 processor cores, 4 GPU cores, one contextual computing core, and one language processing core.) Verizon claims the CPU is 24% faster, while the GPU is 100% faster - not bad, considering the respectable Snapdragon S4 on the previous phones.

Update: So that "X8" SoC is just Qualcomm hardware with a few tweaks especially for Motorola. Dual-core CPU, quad-core GPU, low-power core, and a core dedicated to the language processing in Google Now and Motorola's custom implementation. The eight-core business is mostly marketing fluff.

The DROID MINI uses a 4.3-inch Super AMOLED screen with the same "edge to edge" build as the RAZR M, meaning a smallish bezel. It's a 720p panel, the same size but denser than the RAZR M, and the same resolution as the larger phones. The phone will include wireless charging. Voice commands work even when the phone is off, as seen in leaked Moto X videos. The Mini gets 2GB of RAM and a 10MP rear camera, just like the larger phones, and the proprietary "DROID Zap" media sharing feature, plus Miracast support. 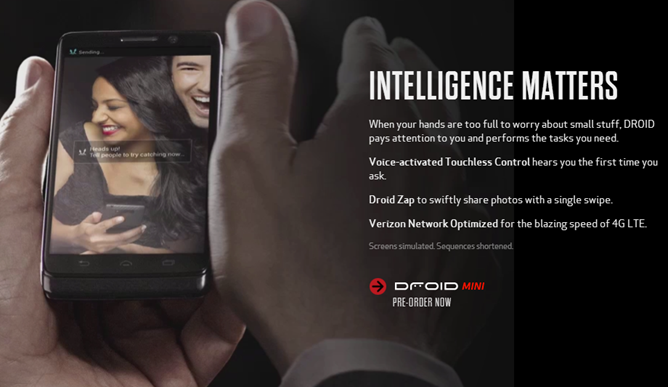 More interesting is the change in style that Motorola has gone with. The Nexus-style virtual navigation buttons from the RAZR M have disappeared, replaced with capacitive versions (but thankfully in the standard back-home-recents configuration). We don't have a reason for this change, but it is a bit disappointing from a pure Android perspective. The rest of the phone is much improved cosmetically - gone is the jarring mix of materials and finishes from the somewhat disjointed M. It's smooth, rounded Kevlar, Gorilla Glass, and not much else. Also: the microUSB port has been moved to the bottom of the device. Finally! 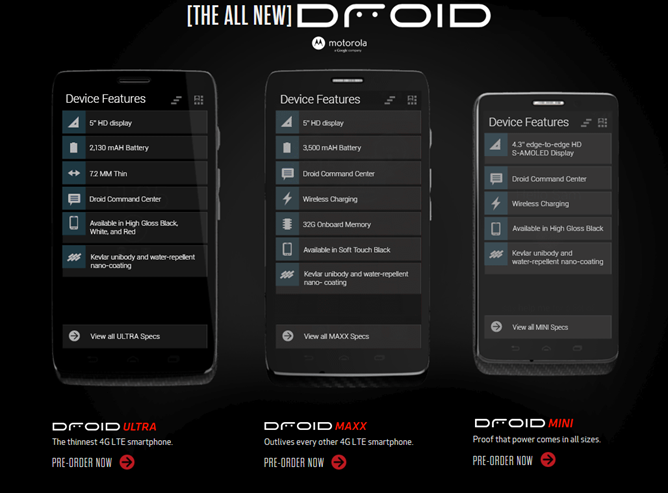 Features include active display alerts, which lights up a portion of the screen instead of using an alert light, the "Quick Capture" feature seen in the Moto X camera leak, and the Command Center widget. This is the old "Circles" Motorola widget on steroids. And for you Ingress players, the Google location game is pre-loaded. (Here's hoping it can be disabled.) Buying the DROID MINI between now and September 30tht will get you free Google Music All Access for six months.

Update: Android Police has confirmed with both Verizon and Motorola that the bootloaders are locked on all three new DROIDs. Everyone try to act surprised.