Motorola and Verizon unveiled the newest members of the DROID family today, and I had some time to play with these freshly-minted Kevlar constructions. My initial conclusion? These phones are all really, really alike.

In fact, it is easier to talk about the ways they are different than the ways they are the same. The Ultra is slimmest of the three (it's also the only not packing Qi wireless charging, because it would make the phone thicker). The MAXX is the same as the Ultra, but with a beefier battery, 32GB of storage (as opposed to 16GB), and a sateen-like finish (the Ultra is super glossy). The Mini is... smaller. Its display is only 4.3" across, and its battery is, of course, a bit less robust as well. 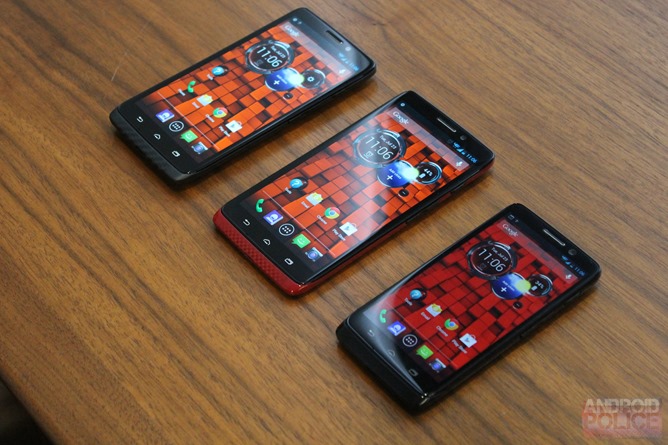 That's really it, apart from aesthetic distinctions. These phones all run the same chipset, the same camera (10.1MP with ClearPixel*), the same software, have the same Kevlar wrapping, the same display resolution, and - apart from wireless charging - the same features. And yet they're priced quite differently - the Mini will be $99 on contract, the Ultra $199, and the MAXX a staggering $299.

Oh, and here's a list of things about them that may or may not upset you:

At least they all have NFC.

*Motorola confirmed to me that ClearPixel is a thing. They're not advertising it on the DROIDs yet, but it's there. Presumably because they want everyone to "oooh" and "ahhh" when they unveil it on the Moto X. ClearPixel should significantly improve the camera's ability to capture light, and reduce capture times in normally lit settings, while increasing available light in those where it is less than ideal.

The smallest member of The Three Droidsketeers, the DROID Mini is aimed squarely at smartphone lovers looking for Android device that is, well, smaller. The 4.3" AMOLED panel was quite vivid, as AMOLED panels tend to be, but its qHD resolution was immediately apparent as lacking in my eyes. Pixelation was readily visible on closer inspection, and the colors themselves just looked too hot. It's not a bad screen, by any means, it's just not going to win any awards. (Edit: Apparently it's 720p, though maybe it's PenTile? It didn't look great to me - that's all I'm saying.) Most people will find it sufficient, and really, for a $99-on-contract phone, I wouldn't be one to complain.

The Mini does seem a bit thick, but it's not cumbersome or heavy to hold, and moves through Android just as speedily as it larger siblings. All three phones, for the record, seem to run very, very smooth out of the box. I will say that they don't feel quite as fast the HTC One Google Play Edition I'm carrying around currently, though that's to be expected - they're down two processing cores compared to the One.

The Mini felt fairly solid, though I quickly came to the conclusion that it didn't feel on par with the Ultra or Maxx in this regard. Again, sacrifices in the name of cost come to mind. The size was an inarguable factor in making the Mini comfortable to hold, however, and after a few minutes with it, I did wonder if a 4.3" display might be enough in most situations. But after using the Ultra and MAXX, that thought was quickly squashed. 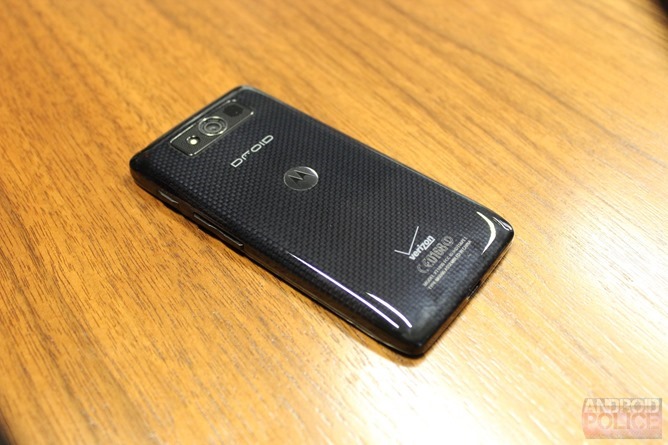 I came away legitimately impressed with the Ultra after 15 or 20 minutes playing with the phone. While I cannot comment on the aesthetics of glossy red Kevlar, the Ultra felt remarkably well-constructed. It seems as though Motorola has really upped its game on the phone chassis, and it shows - the company was quick to point out in its presentation that more of the Ultra is wrapped in Kevlar than ever before. Neat.

As with the Mini and MAXX, Android on the Ultra zooms along confidently and quickly, if not with the breakneck pace of Snapdragon 600 devices.

While I personally can't say I'm a fan of the glossy finish on top of the Kevlar back plate, there is one objective flaw to the Mini and Ultra's shiny exteriors: fingerprints everywhere. The gloss is so intense that I had to wipe down the phones for almost every single photo I took, and that's kind of, to use the technical term, yucky. But considering most of these phones will be wrapped in various even-uglier cases, I guess that doesn't matter. 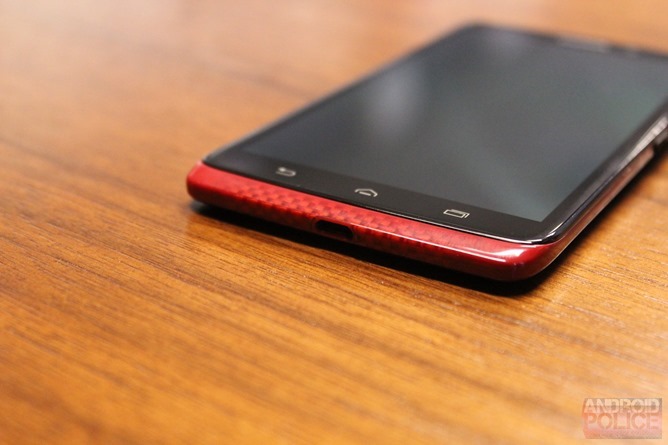 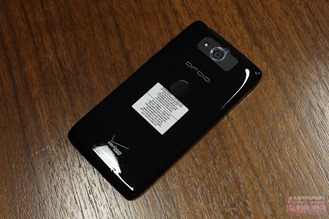 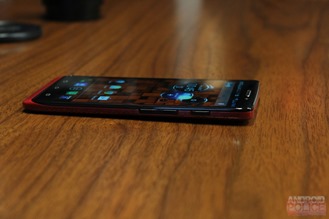 It's the Ultra but, in my opinion, a hell of a lot less ugly. And slightly thicker - the MAXX is a whopping 8.5mm in profile. Gasp. (That's sarcasm, for those of you without a functioning detector.)

It's nice. The one thing I will say is that because it's thicker, the MAXX feels a little more flex-prone than the standard Ultra. I'd still probably take the MAXX, though, because A.) battery and B.) not going to blind hapless bystanders with glossy finish.

Also, wouldn't it have been hilarious if they called it the DROID Ultra MAXX? Best worst phone name ever. 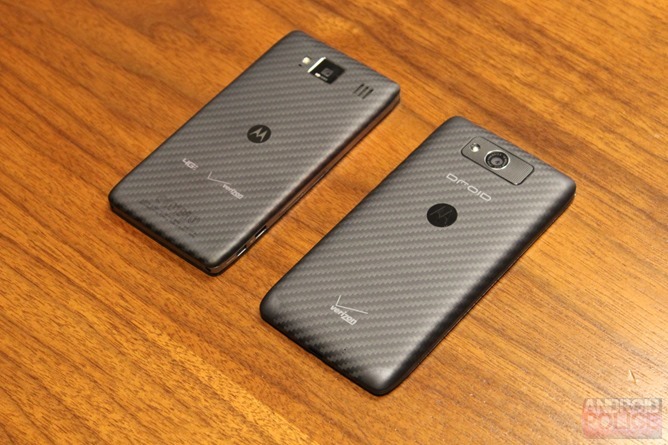 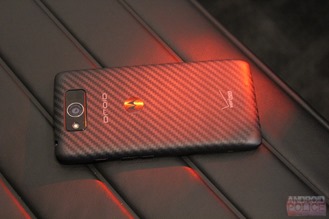 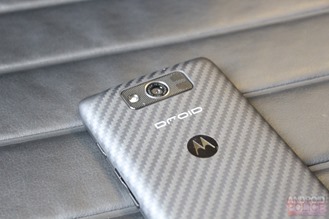 Here's the thing about these phones - they are so ridiculously similar that it all comes down to your budget and personal preferences on each. If you want a small phone, the Mini is so similar to the Ultra and MAXX that it really isn't all that much of a compromise. Likewise, the MAXX isn't so much better than the Ultra that you'll feel you missed out if you choose not to pony up for the bigger battery / more storage. Because the hardware is so similar and the software tweaks fairly limited, updates should be a breeze as well.

And those new Motorola features (which all of these phones have)? Flicking the phone twice with your wrist to launch the camera app seems like a solution to a problem that already has a much, much better solution. Put in a hardware camera button, for god's sake. It hurts my brain how silly this is. I cannot fathom who would find it useful, particularly because in the few times I used it, I got it to launch maybe two times out of five-plus attempts. I'm sure with mastery it gets easier, but come on, this seems ridiculous.

My video hands-on with the MAXX attempted to demo the always-on voice actions, but the phone was keyed to someone else's voice. Yep, the new DROIDs (and presumably Moto X) will learn your voice when you set up the passive listening features. You say "OK Google Now" three times during setup to get started, and the phone will get more and more in tune with your tone as you use it. The benefits of such a feature should be obvious. I tested the listening off camera, as well, and it worked like a champ. A really great feature, if you ask me.

Active Display is similar to Samsung's air gesture that lets you wave over the phone to see the clock / some notifications. Motorola's version works differently though, using the proximity sensor and accelerometer to tell when you take the phone out of your pocket. Pull the phone out, and you get a dim readout of the time, and little notification icons. Grab one and it'll expand to tell you more. The thing Moto really played up is that Active Display will drain less battery than just tapping the power button, as it is specifically designed to illuminate only a small band of the display around the center, while most of the pixels remain totally dark. I'm sure Samsung will follow suit on this at some point. It also works if you put the phone face down on a table, and then flip it over.

The new camera app is so-so. At first I liked it (as you can see in one of the videos), but the more I used it, the more it felt just a little too bare. I really think they took too much from Google's super-minimalistic approach to the camera UI. Real-life cameras are cluttered with buttons for a reason: you need quick access to a lot of functions if you're remotely serious about taking photos. The new Moto camera UI isn't bad (I like dragging up / down to adjust zoom - makes a lot of sense to me), but it's not any better than any other I've used, and it's definitely worse than Samsung's or HTC's for quick access to useful settings. You can disable the tap-to-shoot feature and get a dedicated virtual shutter button (tapping then focuses), which I have to say is something I would do almost immediately were it my phone.

There are more Moto-specific features, but in my limited time with the phones I didn't get to do the full rounds. If you have more questions about the new DROIDs, ask them in the comments and I'll do my best to answer them where I can. (Things like camera quality, battery life, benchmarks, and comparisons to <insert my phone here> are not things I'll answer, because I don't know. I had 30 minutes with these phones, not three days.) 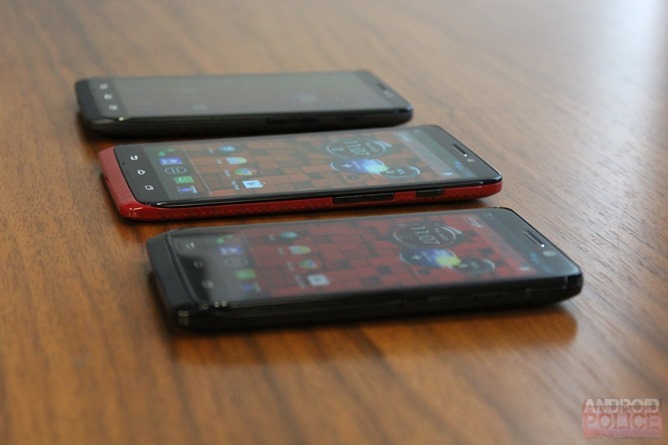