Like Google has done with its own first-party apps, Samsung has placed its WatchON app on the Play Store for easy updates. Of course, it's still limited to Samsung hardware - this version has been updated for the Galaxy S4 (and the S4 Active, and likely a few more variants as they become available). Meanwhile the tablet app is being expanded to include support for the Galaxy Note 10.1 and both 7" and 10" versions of the Galaxy Tab 2. More recent hardware like the Note 8.0 and the Tab 3 family already have it installed. 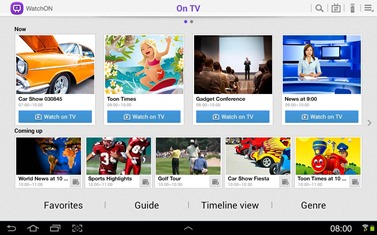 If you haven't played around with it, WatchON is a combination of a universal remote app and a media browser, with access to listings for local TV, cable, and satellite providers as well as a few IPTV services like Hulu. All devices with WatchON have access to schedules, recommendations, reviews, integration with Samsung SmartTVs, and the compulsory Twitter and Facebook sharing. According to some of the reviews, the infrared support, streaming video, and WiFi control (for Roku and similar devices) is a little spotty, so your mileage may vary depending on your home theater setup.

[Hands-On] Wyze Launcher Intelligently Organizes Your Apps For You, But It's Not Yet As Wise As ...

[Deal Alert] Get 3 Months Of Rdio Music And $25 Credit For Vdio Video Content Free With Coupon ...