Back in mid-February, Belkin released and early beta build of its WeMo for Android app. It was very light on features at the time (and only available for the Galaxy S III), but has been receiving updates ever since to get it up to snuff with the experience Belkin was looking for. 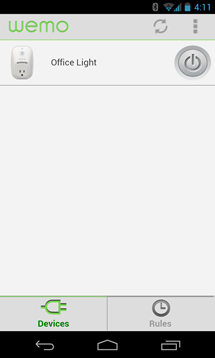 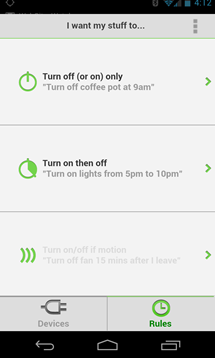 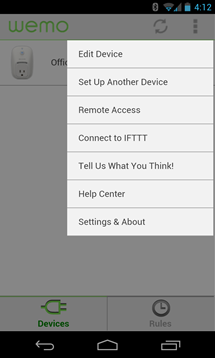 For those who may not be familiar with WeMo, here's the in-a-nutshell explanation: it's a family of devices – WeMo Switch, WeMo Light Switch, and WeMo Motion – that connect to your Wi-Fi network and allow to you control household electronics directly from your smartphone. For example, you could have WeMo Switch plugged into the coffee pot and fire it up directly from bed when you wake up. Or install a WeMo Light Switch in the living room and give it a flip on the way home at night so you don't walk into a dark house. But those are just a couple things possible with the WeMo family of devices.

Of course, to make all this work, a solid companion app is clutch. Today, Belkin released the full version of the app into the world, dropping the beta tag and certifying it for use on Android 4.0+ devices. I've actually been beta testing the app and Switch for the last several months, and it works flawlessly at this point. Once connected to your Wi-Fi network and synced up with your device, you'll not only be able to toggle the unit's state directly from your phone, but also set up rules to do so automatically, depending on the time of day. For further customization, WeMo can also be set up with IFTTT rules.

The WeMo app is a free download, but the various units will set you back between $50-$100.

“Android users have been waiting for WeMo compatibility, and our ability to deliver on their request is an important next step in demonstrating our continued commitment to creating a simple, customizable home monitoring and control system that can be accessed wherever and whenever,” said Ohad Zeira, director of product management at Belkin. “With more than a billion Android devices expected by 2014 according to Gartner, expanding WeMo capabilities to Android devices is a necessary step for the continued success and evolution of the WeMo brand.”

Compatible with most current and future WeMo devices, including the WeMo Light Switch, WeMoSwitch and WeMo Switch + Motion products, the fully functional app enables users to control electronics on and off from anywhere via Wi-Fi® and 3G/4G networks. The app also integrates with IFTTT, an online service that creates triggers using different Internet-based services such as email, weather and social media. For example, you can use IFTTT to create a rule that will send a text to your phone whenever a WeMo Switch + Motion senses motion or trigger a WeMo Light Switch to turn on your lights when the sun sets.