It's been quite some time since we heard major release information from the ROM developers at the Android Open Kang Project, or as the cool kids call them, AOKP. After three months of relative quiet (though plenty of development and testing has been going on behind the scenes) The team just announced AOKP Jelly Bean Milestone 2, a complete and hopefully bug-free build that brings a ton of new features. 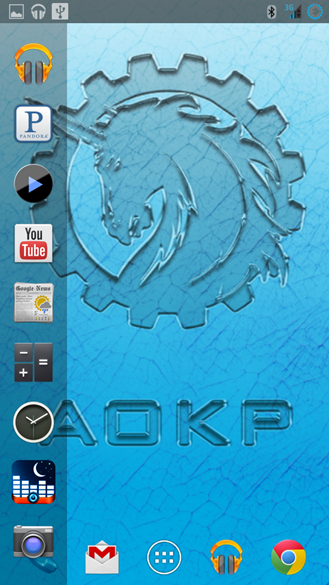 The most user-facing addition is probably Ribbons, a built-in quick launcher that works a lot like SwipePad. Swipe in from the left, right, bottom, or any number of other locations including the lockscreen and notification shade, and you'll open a customizable vertical list of app/function shortcuts. Setting it all up is a bit of a pain, but it's just as configurable as everything else in AOKP. The best part is that an app or shortcut can be bound to a longer swipe. For example: on my phone, I've set a short left swipe to open my media app Ribbon, and a long left swipe to go straight to the main Settings menu. See the above screenshot for Ribbons running on my unsupported RAZR M with a pre-milestone build.

Other software additions include a new Superuser from Koush, new permissions, a dark them built in, an HDR camera mode, and some new toggles. New devices have been added since the last milestone, listed below:

Builds are being sent to AOKP's servers as you read this, and all 44 official devices should be ready soon. Check the link below for new builds - at the time of writing, only the GSM and CDMA Galaxy Nexus have been posted. Those of you with unofficial devices should check your favorite ROM forums over the next week or so. Samsung Ditches Media And Music Hubs, Replaces Them With The Samsung Hub (Now In The Play Store)