If you want a "ruggedized" phone on Verizon, you can have any model you want, so long as you want the Casio G'zOne Commando 4G LTE. It doesn't have a lot to recommend it aside from its tough-as-nails construction, but if Verizon's your only choice, it's better than nothing. And on that note, a $50 on-contract price tag is better than twice that at retail. Wirefly has the G'zOne Commando for $49.99, fifty bucks off the standard price. 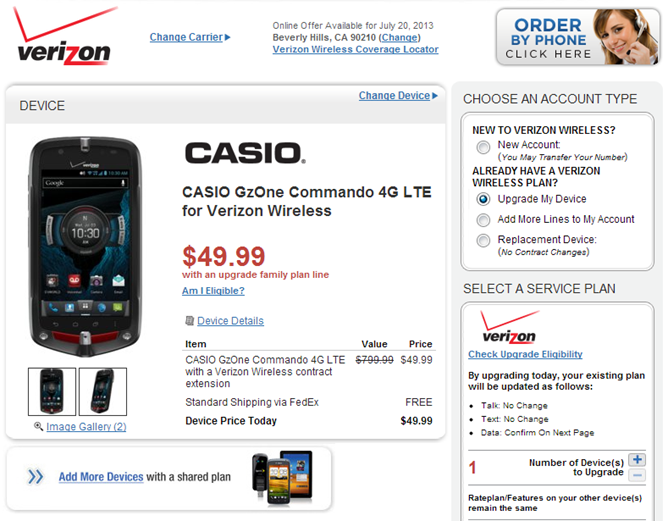 There doesn't seem to be any other option beyond Verizon's retail stores - even Amazon isn't offering the G'zOne Commando 4G LTE yet. The $49.99 price is valid for both new and returning customers, though of course you'll have to sign a new two-year contract. The phone costs $479.99 from Verizon without the ball and chain, and a laughable $799.99 from Wirefly (that's a pretty standard secondary retailer move).

Specs are on the low end of the midrange, with a 4-inch 800x480 screen, 1GB of RAM, 16GB of storage, an 8MP rear camera, and (sigh) a skinned version of Ice Cream Sandwich. But if you're seriously considering the Commando, you'll be more interested in the MIL-STD 810-G protection rating, guaranteed to work from a drop of 1.5 meters and in water up to 1.5 meters deep for half an hour. There are also a range of extended sensors and outdoorsy apps, none of which will make the case any prettier.