Sprinkle Islands will feel instantly familiar to fans of the original game, as the core concept is the same. Players still control a water cannon atop a wooden fire truck on an alien world, their goal remains putting out any and all signs of fire, and the degree of challenge is still pretty high. If you haven't already familiarized yourself with this series, you might want to take a second to do so. The fundamentals of this sequel are largely unchanged, but that isn't necessarily a bad thing. Mediocre has tweaked enough to give the experience a fresh feel, even if some of those changes introduce a fair degree of frustration. This is still one of the most polished mobile games out there.

I give a fair degree of leeway for the possibility that I just suck, but this game is hard. This is not a game to whip out when you want to breeze through a series of stages, doing something simple and repetitive to pass the time. Open Sprinkle Islands when you want a brain teaser. Yes, completing a stage isn't the hardest thing in the world, but doing so with enough water to sprinkle on the flowers on the counter afterwards is far easier said than done. In some stages I manage to get four out of five water drops in the first attempt. Others require multiple playthroughs just to get two. Sometimes I even got three water drops, only to watch them drop down to two. Oh yeah, that last frustration is new to the sequel, so I should pause to flesh this out. 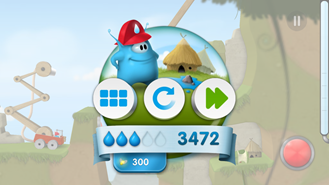 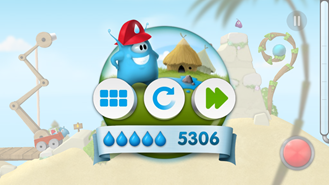 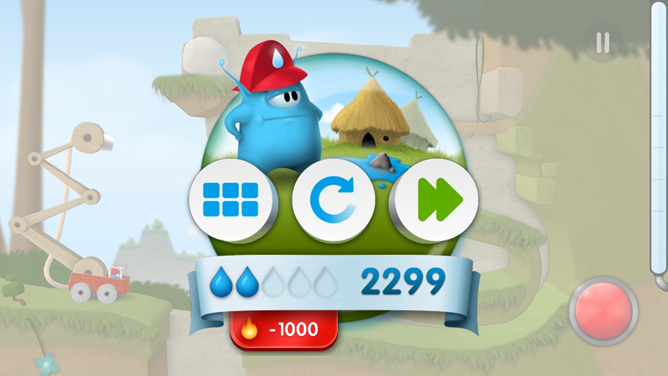 Each stage in Sprinkle Islands consists of two to three puzzles spread across a significantly larger area than the first game. After players save the huts in one area, the fire truck starts to move to the next, pausing when it's in position to combat the next inferno. The movement is all automatic, but you retain control over the water cannon and are sometimes tasked with dousing flames while in transit. You will aim, you will use up more water than you want to, and you might not put the fire completely out. Now you're left with too little water to complete the next area, or you will complete it with something almost resembling a passable score only to have 1000 points stripped away for missing a patch of flame. It's not enough to save all of the huts from certain incineration, you must trample out even the smallest of sparks soldering alone in the emptiest of fields. Oh, and be careful where you keep that water cannon while you're in transit, as it's now possible for it to get hung up on things. 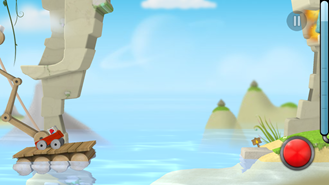 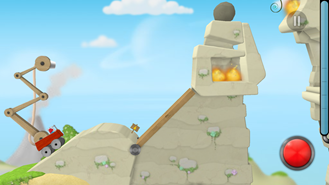 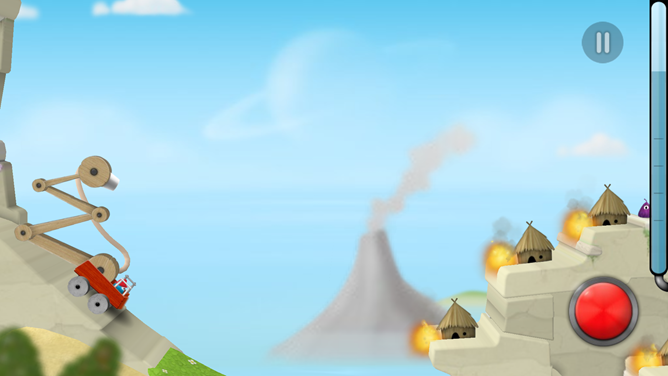 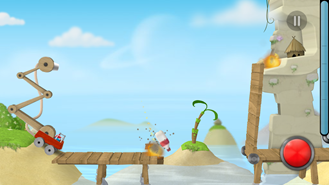 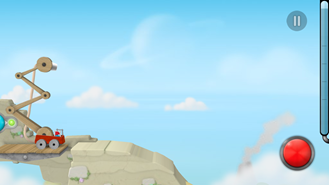 Speaking of the water cannon, it's easier to control this time around. Rather than having to manually control both the height of the cannon and the direction it aims in separation, they're both managed with a single swipe. Just place your finger where you want to aim the water, and the cannon will intelligently reposition itself to the necessary height. The controls are largely spot-on, but I still suffered from more premature spurts than I would like. The area of the screen designated for aiming versus firing isn't as clean cut as the virtual red button would suggest, though it's also possible to aim using the left side of the screen instead. 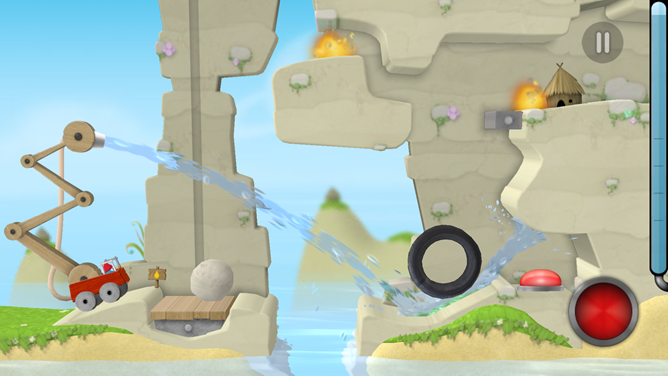 The boss battles add some degree of diversity, but it's mostly superficial. You're not engaging in mortal combat with fierce beasts here. Instead you watch as they set houses on fire and race to put them out, and in some cases, remove the source fire that the boss is spreading flames from. The bosses repeat the same basic movements nonstop and convey about as much life as a broken Furby. In the end, these stages feel the same as the others, just with a more animated background and greater repetition. 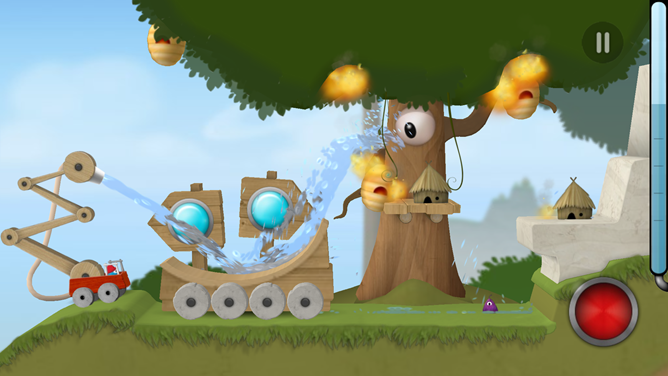 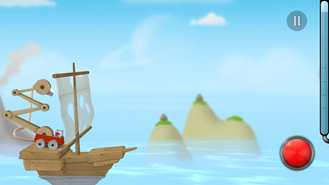 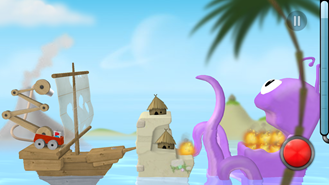 This last change is minor, but crucial. A small chime now plays whenever you've successfully put out a fire. This greatly reduced the number of times I stopped spraying a fire, only to watch it grow back up to its original size.

The loading and level selection screens are so similar to the original that I wouldn't blame you for doubting if you launched the correct app. The full game, which costs $1.99, contains four areas consisting of twelve stages each, with more levels coming in the future. Unfortunately, the scenery remains just as bland as it looked in the original. The forest level looks only marginally different from the beach, and by the time you get to the cave, it's too little too late. Despite the new subtle animations attempting to breathe new life into these environments, they're still thoroughly unexciting. The graphics are gorgeous and the characters exude charm, it's just a shame that the world they inhabit does not.

The water remains the star of the show here, as its physics are simply amazing. Your stream will splash off walls, rush off ramps, and flood small crevices. You'll use it to press buttons, open doors, and topple rocks. The various puzzles that stand between you and dousing every last flame aren't overly complex, but it's the water's believable behavior that makes them work, and it's the water that makes them fun. That said, the puzzles do get repetitive over time, just as they did before. 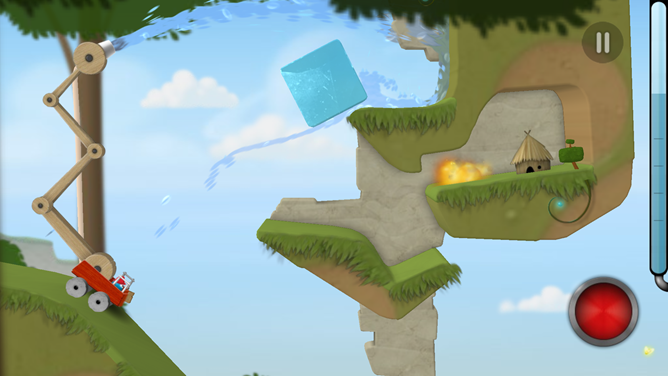 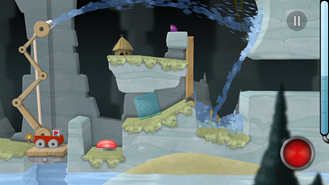 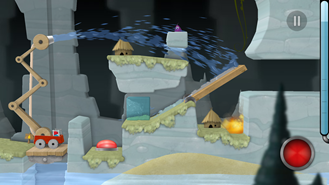 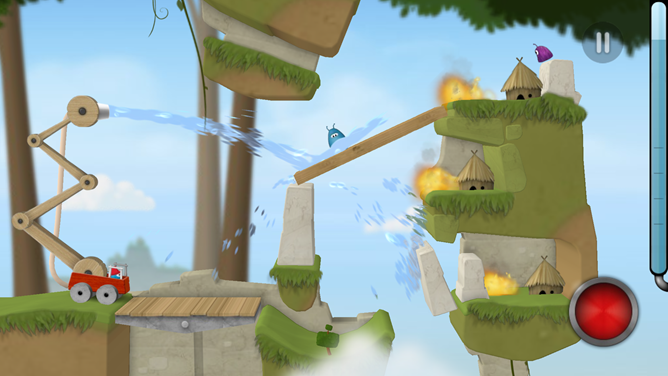 It's difficult to pinpoint which type of gamer the Sprinkle series is best for. The experience is undeniably casual, but the puzzles get very difficult, very fast. Sprinkle Islands alleviates the problem somewhat by streamlining the controls, making it easier to aim and manage your flow of water, but it exasperates it by introducing longer, more complex levels. Still, if you loved Sprinkle, this title is easier to play, more pleasant to look at, and far less static of an experience. It doesn't feel like an evangelical title that will bring in legions of new fans, but it contains most of the elements necessary for a successful sequel. 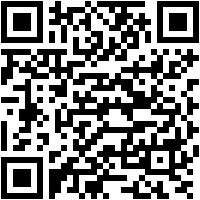 LG And Virgin Announce The Optimus F3, Now Available For $179.99