Yesterday's video for the allegedly "new" Nexus 7, widely speculated to be revealed at Google's July 24th event, was a bit low-fi to get the details. Today CNET has a new image, purportedly from the same source, that gives us a clearer image of that specification sticker on the back of the tablet. There's just one new piece of information that we couldn't make out before, under the "Memory" entry: DDR3LM 1600 256M*16. 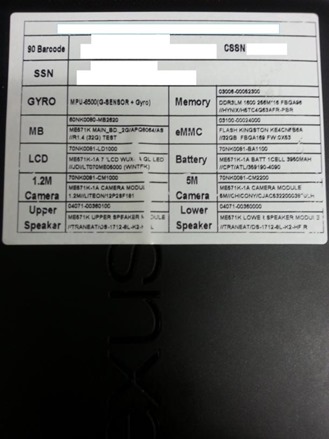 For those of you who don't obsessively upgrade your PCs, that's 16 modules of 256MB of DDR3 (fast) RAM each, totaling - wait for it - 4 gigabytes. That's twice as much memory as even the most high-end Android device so far. Of course, this is anything but official: the device in question could be a prototype, or the specification sheet could just be in error. But it's certainly encouraging. RAM is dirt-cheap these days, and there's no technical limitation that would prevent Google or ASUS cramming that much memory into a tablet. The sticker also indicates 32GB of storage.

Again, I'd like to stress that the above photo is in no way a confirmation of the new Nexus 7 hardware. But since the Nexus line is designed to push Android manufacturing in the direction that Google thinks is necessary, it's not totally out of the question. 2GB is the new standard for flagship hardware, and it won't be too long before even that starts to feel a little cramped, what with crazy high-resolution screens and multi-gigabyte games becoming the norm. We'll be waiting on the July 24th event with bated breath.

Update: As pointed out by Fredrik Yngström in the comments, it turns out the memory nomenclature uses bits instead of bytes, so each stick ends up being 512MB rather than 4GB. The Nexus 7 has 2GB of RAM after all.