Samsung Galaxy S4 owners on Verizon, there's a new update available for your phones. But don't bother checking your Settings menu for an over-the-air prompt: it's only available via the Verizon Software Upgrade Assistant after connecting the device to a PC. Standard users should be fine, but rooted users (or those who intend to root or flash a new ROM sometime in the future) should avoid this one. According to several posters on XDA, the VRUAME7 patches existing root methods, and flashes a new version of the locked bootloader that prevents users from flashing a pre-release kernel, effectively blocking another path to root. A similar update may have already gone out to Sprint Galaxy S4 owners. At present, no one has found a way of rooting the new firmware. 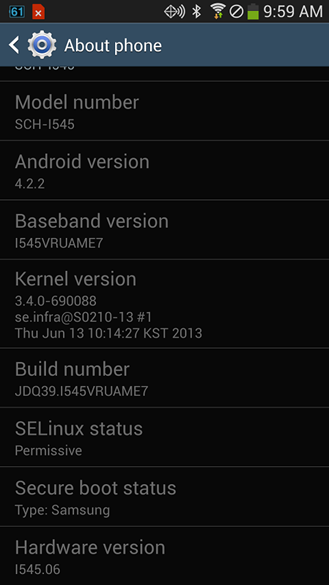 The VRUAME7 update has no changelog at the time of writing, but some users are reporting that it includes the limited Apps 2 SD function (moving applications or application data to the SD card to save storage space) found on other recent S4 updates. It seems unlikely that Verizon or Samsung would send out an update for the sole purpose of blocking root methods, but the inclusion of a new locked bootloader certainly indicates that the subject is receiving some attention. At least one XDA user has stated that the update activates the Knox Agent, a Samsung-developed secure boot method intended for "bring your own device" solutions, but also works as an active block for SuperUser applications.

Fortunately, the update seems to be limited to Verizon's proprietary Software Upgrade Assistant (available via a virtual CD drive when you plug the Galaxy S4 into a PC) or Samsung's own Kies, so it's fairly easy to avoid at the moment. (The download itself seems to be failing for a lot of users, on both the Upgrade Assistant and Kies.) We're sure the tireless root/ROM community will have a solution at some point, but considering the extra effort Verizon is putting in to actively block root, it may take some time. Advanced users, consider yourself warned.

Google+ Will Now Highlight What You +1 To Your Followers, With Your Permission