This morning, SanDisk announced its newest line of microSDXC cards, the Extreme series. And they're Extreme[ly] fast. But as you and I know, manufacturer speed claims for microSD cards aren't exactly indicative of real-world performance figures (especially in smartphones), so we actually compared SanDisks's new Extreme cards to the older Ultra series. Here's what we found.

On Android, we used the A1 SD Bench app loaded on a Galaxy Note II to compare performance between a 64GB Extreme SDXC and an older (used) 64GB Ultra SDXC.

The thing to note here is that the Note II we used to test these cards does not support UHS-1, and will get what SD card manufacturers refer to as "Class 10" performance. Most smartphones and tablets do not support UHS-1 speeds, and thus will not be able to get anywhere near the claimed maximum performance of UHS-1 microSD cards. One notable exception is the Exynos Octa version of the Samsung Galaxy S4 (model GT-I9500). Still, there is great disparity in the performance of Class 10 microSD cards, and the Extreme SDXC is the quickest I've ever seen.

If you want proof that UHS-1 support makes a big difference, the Windows-based test (using CrystalDiskMark) produced a much more staggering disparity between the two cards. Check it out. 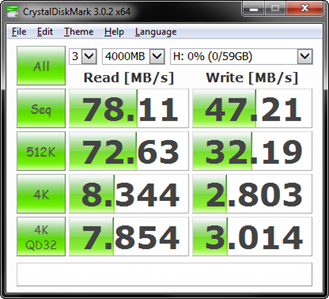 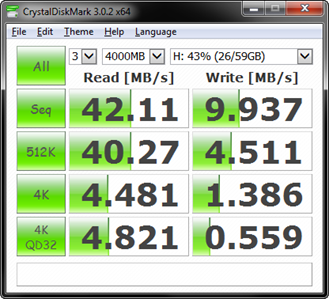 The new Extreme card nearly doubles the Ultra for read speeds, but the write performance is what really stands out: the Extreme benchmarks almost five times faster than the old Ultra. That's pretty crazy. These results, as compared to the ones benchmarked in Android, also line up more with SanDisk's claimed performance figures of "up to 80MB/sec read and up to 50MB/sec write."

The new Extreme cards are available in capacities ranging from 16GB (SDHC, max write 30MB/sec, $59.99) to the 64GB SDXC card we tested here ($199). You can check them out SanDisk's website, here, and they should be available at major online retailers in the coming weeks.

Parrot Zik Bluetooth Headphones Review: A Glimpse Into The Future Of Wireless Headphones