While the Big Four have been able to tout the GS 4 for several months now, customers of most smaller carriers have been left wanting. Today marks the launch of the device for two such carriers: MetroPCS and C Spire Wireless. 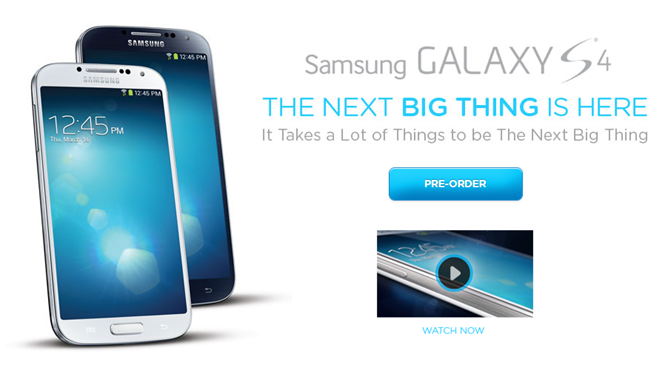 Note: looks like the page hasn't been updated yet with the option to buy now. It should be live later today.

On the contrary, C Spire Wireless is offering the device on its 4G LTE network and making it available in all retail locations and online for $200 with a two-year agreement.

MetroPCS Brings the Samsung Galaxy S® 4 to its Growing Nationwide

DALLAS (July 8, 2013) – With today’s launch of the Samsung Galaxy S® 4, MetroPCS is coupling the ground-breaking features of the latest generation of the Samsung Galaxy-line of smartphones with the exceptional affordability of its unlimited rate plans, and is providing customers with access to a faster nationwide 4G network for one of the best wireless values in town.

The popular smartphone can be paired with any of MetroPCS’ affordable no-annual-contract nationwide 4G service plans, which start at just $40 per month for unlimited data, talk and text,  taxes and regulatory fees included.

“Providing choice and flexibility for consumers means offering premium smartphones without the costly service and a long-term contract,” said Tom Keys, MetroPCS COO and executive vice president. “By combining the Galaxy S 4 and affordable nationwide 4G service plans starting at just $40 per month, we are truly enabling our customers to have it all on an enhanced, nationwide 4G network at a tremendous value.”

The Galaxy S 4 opens the door for consumers to experience mobile like never before, and its suite of features ensure that the experience is tailor-made for each individual. The Galaxy S 4 makes an impression with a 5-inch, full HD Super AMOLED™ display with Corning Gorilla Glass® 3.0, a 1.9GHz quad-core processor for effortless multi-tasking and runs the latest version of Android (4.2.2). The 13MP rear and 2MP front cameras capture stunning pictures, 1080P video and turn even the most novice photo-taker into a professional through a variety of innovative camera enhancement features. And the Galaxy S 4’s HSPA+/LTE connectivity[1] offers a blazing-fast Internet experience for quick browsing, multimedia viewing and effortless content uploading.

The Galaxy S 4 builds on the innovation inherent in each generation of the popular Galaxy smartphone line with the introduction of new features including:

· Smart Pause™: Pause a video by looking away from the screen.

· Air View™: Preview emails, photos in the gallery, or even the stories in Flipboard®.

· Air Gesture™: Answer a call or skip to the next song by waving your hand in front of the screen.

· Group Play™: Wirelessly connect multiple Galaxy S 4 phones to play games and share photos and documents. Using the Share Music feature™, users can stay in time and in tune with friends by allowing them to play the same song on multiple phones in sync.

The Galaxy S 4 is available in select markets now for $549 plus tax, with additional markets and online availability to be announced soon.