Here it is, ladies and gentlemen, the next DROID. Again. After being revealed in white over the weekend, along with the face of its MAXX sibling on Friday night, the Ultra is all but officially Verizon's next big thing to wear the caps lock-enhanced, Lucasfilm-licensed DROID moniker. And it's a thing of... well, not beauty. Beauty really isn't the right word. It's a thing of carbon fiber Kevlar (thanks for pointing that out), and I'll let you draw your own aesthetic conclusions on that basis. 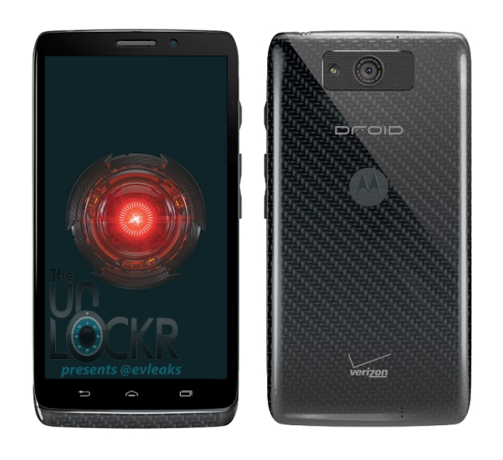 Curiously, there are no logos whatsoever on the front of the phone. Verizon's marketing department must have had the day off. The one specification @evleaks drops is an alleged 10MP "RGBC" camera. My guess is that this alludes to the now-rumored Clear Pixel camera on the Moto X, as RGB, of course, refers to Red, Green, and Blue, while the "C" typically refers to "Clear" in reference to imaging technology. Granted, there are very few references to RGBC imaging sensors out there. Without getting too far down the rabbit on this, clear pixels are actually more often called panchromatic pixels, and camera sensors utilizing them were described by Kodak back in 2005. Theoretically, they should significantly boost low light performance and reduce image capture times. Take all this with a grain of salt, however, as the conclusions are based on an admittedly vague acronym.

Other specs for the Ultra aren't known at this point, but @evleaks goes on to speculate about what they may be (see the source for more). There's no info about a launch date, but we can probably expect to see this device showing up pretty soon - maybe this week.

[New Game] The Lone Ranger Enters The Play Store, But Can This Franchise Be Saved?