Update 7/9/13: Clove updated the timeline from July 15th all the way to September 9th. Boo:

UPDATE - The release date of the Sony SmartWatch 2 has been put back to September and will not be launching week commencing 15th July as previously stated. The revised arrival date is week commencing 9th September.

Sony announced the second version of its Bluetooth SmartWatch just a couple of weeks ago, and you'll be able to buy one in another couple of weeks, at least if you live in the United Kingdom. While Sony hasn't said anything about a rollout aside from a vague "September" date, UK electronics retailer Clove has already announced availability for the SmartWatch 2. The store expects stock to be ready on Monday, July 15th, at a price of price is £120, just shy of $180 USD. 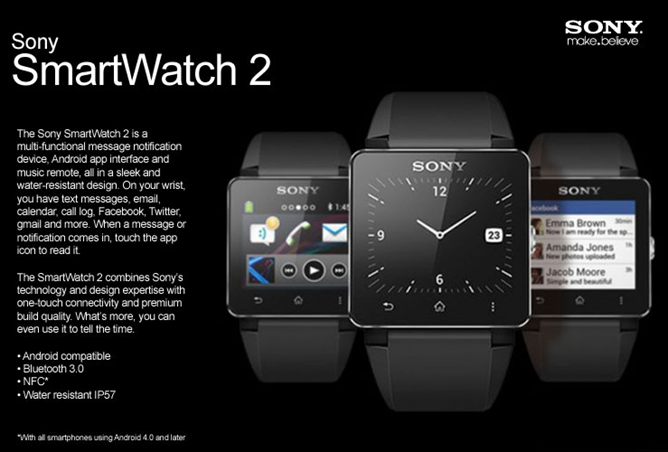 Sony hasn't said when the SmartWatch 2 will be available internationally, or for how much, though the original press release had it pegged for a September debut. A Euro-focused launch isn't unheard of for the company - their phones tend to be targeted for unlocked users, and don't often make it to American carriers. When the SmartWatch 2 does jump across the pond, you can expect it to retail for somewhere in the $150-175 range (though that's just a guess from your friendly neighborhood gadget blogger).

The SmartWatch 2 improves on the original with a bigger, denser LCD touchscreen, longer battery life, Android-style capacitive touch controls, and an NFC chip for easy pairing with a newer smartphone. The design itself is better as well: it's got a swanky new housing that shares a lot of design touches with the Xperia Z, it's IP 57 waterproof, and it uses standard 24mm watch lugs for swapping out with typical 24mm watch bands. Some of the apps Sony highlighted during the announcement were a remote presenter, a remote camera shutter, integration with Runtastic, and the typical email/SMS/social notifications, among many others.

Also, the power button is the same shape and location as a winder/adjustment dial on a real analog watch. Give Sony points for style.

3D Home Is A Launcher That Makes Your Device Into A Swanky Bachelor Pad. Wait, What?