For those who may not be familiar with the BOOM, here's the skinny: it's a cylindrical, 360 degree, plasma coated, waterproof, stain resistant, NFC-enabled speaker. Really, it's a Bluetooth speaker that's designed for life. But the design is just part of what makes this speaker so good – it also has 15 hours of battery life, and (most importantly) it sounds incredible. 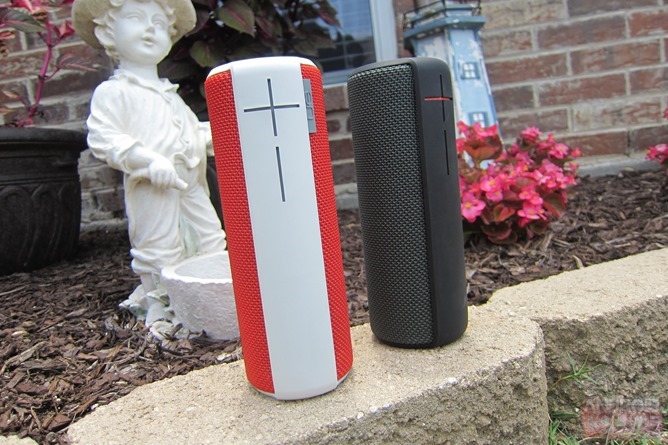 As I've already mentioned, the BOOM is cylindrical – it's a bit taller than a soda can, and about the same diameter. Stylistically, it's simple and well-designed: roughly 80% of the unit is comprised of the 360 degree speaker (a genius design), with large volume buttons on the "front," power and Bluetooth buttons on the top, and microUSB charging port, a small clip (which can also be removed so the speaker can be placed on a tripod), and 3.5mm input jack on the bottom.

Can shown for scale... and because I love Mt. Dew.

The BOOM may be simple in appearance, it has a couple of pretty killer features. For starters, it's equipped with NFC for easy pairing – simply tap your NFC-enabled phone or tablet on the speaker. Done. While that's neat, my favorite feature of the BOOM is by far Double Up mode. This feature allows you to use two BOOMs at the same time for either "double" or stereo audio by way of the BOOM app. This is a killer addition missing from most BT speakers (it's even better that it doesn't require the speakers to be physically daisy-chained together). UE was actually cool enough to provide me with two units to test out so I could specifically give this feature a whirl, and it works flawlessly: with one BOOM connected to your device, fire up the app, head into the Double Up option, and connect the second one. The entire process takes about 20 seconds, and then you can choose whether to put the speakers in stereo mode or just have both spit out the same sound – it even lets you define the left and right channels. It's excellent. 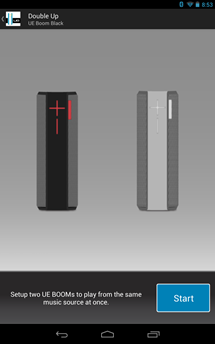 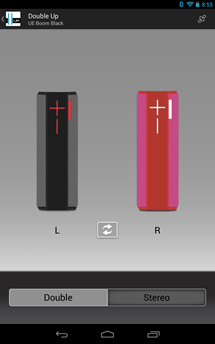 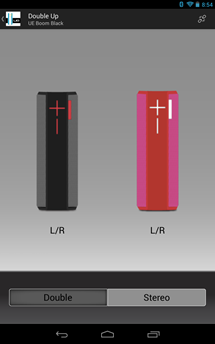 The BOOM app actually detects the red/white speaker as the pink one. Boo!

While the app is still pretty light on features, that's not all it's good for. You can also change specific settings, like the speaker name, alert language, and EQ settings (only three to choose from right now), as well as check the battery level (which can also be accessed by pressing volume up and down at the same time on the speaker) and disable alert tones altogether. Considering the speaker hasn't been available for very long, I imagine more features will make their way to the app over time. Still, this offering is a good start and worth the download if for nothing more than Double Up (assuming you have two BOOMs, or know someone else who has one). 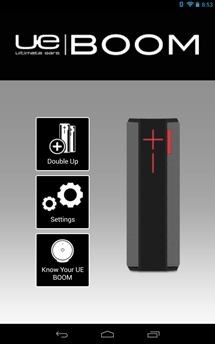 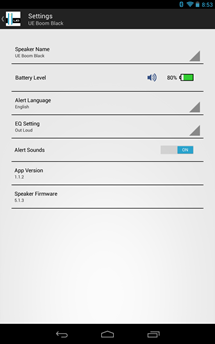 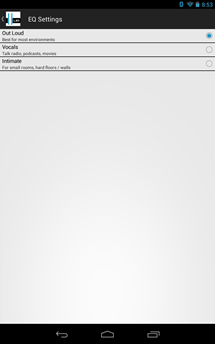 Currently, each speaker operates independently of the other where volume is concerned, so you have to physically adjust the volume on each speaker individually. Thus, one thing I would like to see is a way to control the volume of both speakers at once, perhaps from within the app or with a widget. Alternatively, you could turn the BOOMs' volume all the way up and control them using the device's BT volume, but I tend to do the exact opposite most of the time when using a portable speaker (that, and I don't want to forget the BOOM was at max volume the next time I use it and unexpectedly deafen myself).

The most surprising thing about the BOOM is the weight. At nearly 550 grams, it's almost double the weight of the UE Mobile Boombox, and quite a bit heavier than the Jawbone Jambox, most of which I imagine comes from the speaker's large battery. It's a worthwhile tradeoff in my opinion, but I'd be remiss not to at least mention its somewhat shocking heft, especially for those who are looking for something extremely lightweight (in which case, I highly recommend the UE Mobile Boombox). 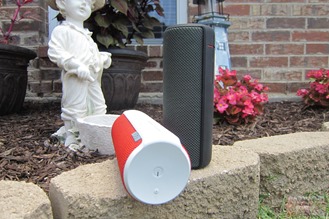 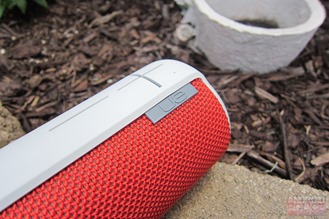 Like many other modern Bluetooth speakers, the BOOM allows two devices to be connected at once, so audio can be played from two different sources (generally intermittently); and it also doubles as a speakerphone. The only feature I found missing from the BOOM is the ability to jump tracks directly from the speaker, which is something that could easily make its way to the unit via firmware update (double tap volume buttons to jump forward/back, perhaps?).

When it comes to sound quality, the UE BOOM is the first small Bluetooth speaker I've heard that doesn't sound like a small Bluetooth speaker. It's packing plenty of punch in the low end, and the clarity is very impressive for a speaker of this size. The overall sound is very well balanced, with Play Music's built-in EQ offering the fine tuning that one may desire. It responds very well to even the most subtle EQ changes, which is nice.

Since the BOOM features a 360 degree speaker design, it sounds the same regardless of where you position it – you can be in front of, behind, or at any other angle adjacent to the speaker and still get clear, audible sound. That is the BOOM's biggest benefit over other Bluetooth offerings where sound is concerned, as you really don't have to worry about where the speaker is positioned during activities. Run circles around this thing, it always sounds great.

Another important factor when it comes to Bluetooth speakers is volume; or, more specifically, how loud it can get. The BOOM may not be as loud as the Rocksteady XS, but it's definitely capable of getting to a good level (the tech specs state that it tops out at 88dBA) while still providing good, clear sound. 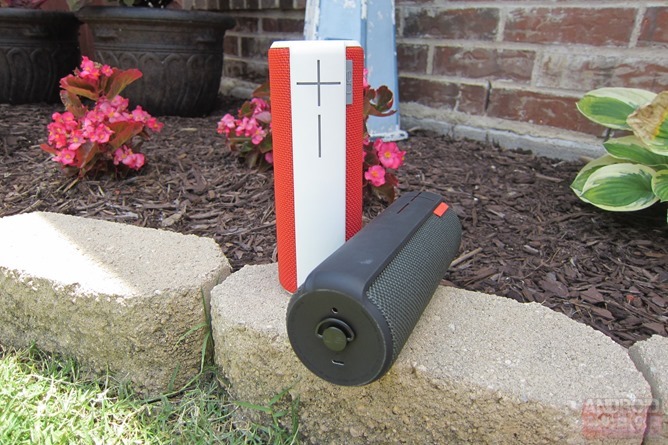 It's difficult to call any specific product in its class "the best" – there are too many factors that come into play, like personal preferences, price, and many others. However, if I, personally, were to apply that label to a portable BT speaker, it would easily be the UE BOOM. It sounds amazing, has a couple of nice standout features, looks great, is water- and stain-proof, and is built like a small, cylindrical tank. Really, I love this speaker.

All that said, it's twice the price of most of the competition, which might make it a difficult pill to swallow for a lot of people. Still, it's also twice the speaker in the same size package, which is a pretty big deal. For that reason alone, I readily recommend the BOOM to anyone who may be in the market for a BT speaker and doesn't want to compromise on portability or sound quality.

Sony Rolling Out 'my Xperia' Remote Lock, Wipe, And Phone Tracking Service Globally In The ...