After teasing the Moto X yesterday, Motorola is again tormenting Android fans by posting a sign-up page for the Moto X. Just put in your email, and the Google subsidiary will send you info on the upcoming device when it's available – probably only a few hours after it appears on your favorite website. 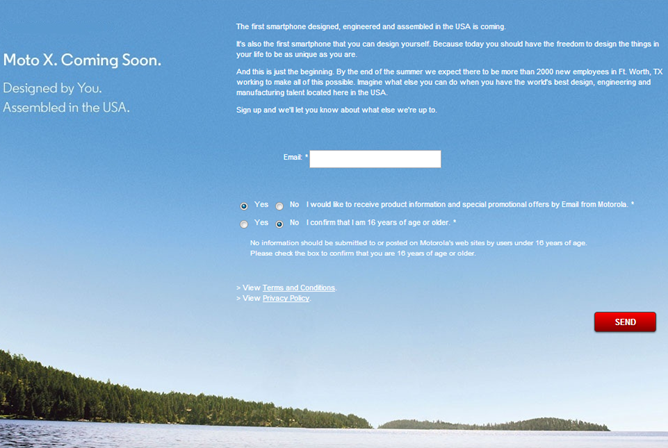 The page again offers limited details on the device, except to remind everyone a few more times that it was engineered and assembled in the good old US of A. Have you heard? Well, they're going to keep saying it anyway. Adding your address will also likely get you general emails on Motorola whatnot, but there's an option to turn off product information and promotions at least.

Moto X. Designed by you. Assembled in the USA. http://t.co/CLlFDlT7NP pic.twitter.com/2Zva2iprq8

According to the page, there will be over 2000 employees working away in Motorola's new Ft. Worth, TX facility by the end of the summer to make this happen. Again, it's looking like a late summer or early fall release. Don't expect any breaking news to come via the mailing list, but maybe there will be some benefit down the line.