Both the Yonhap and Chosun news agencies of Korea are reporting that Samsung Mobile President JK Shin has confirmed 20 million Galaxy S4 handsets have been sold since the phone launched around the end of April. The Verge has a handy graphic below comparing sales of the Galaxy S4, S III, and S II against the iPhone 4S and iPhone 5 from their respective launch dates. As you can see, if the 20 million figure is correct, Samsung is quickly closing in on Apple's "single model sales" crown. 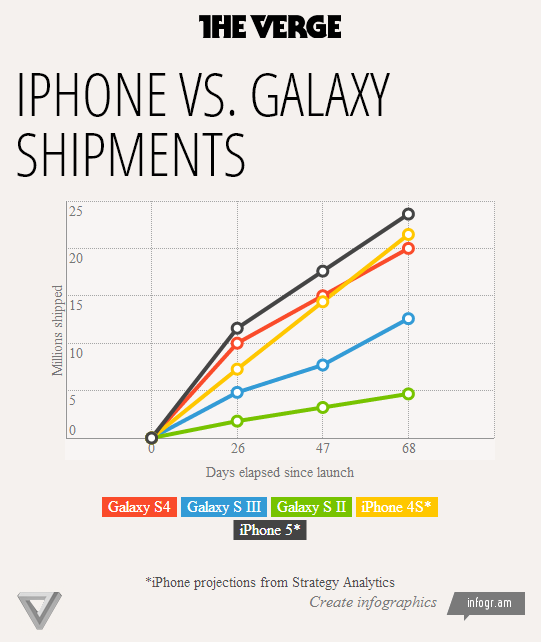 The iPhone 5S (or whatever it's called) will undoubtedly push the bar a bit higher, but judging by the rate at which Samsung's Galaxy S line is gaining steam, the successor to the Galaxy S4 may well be the tipping point in this closely-watched race.

Samsung's massive marketing budget, along with the general critical acclaim and enthusiastic user reception the Galaxy S4 has received, are obviously putting the company on the fast track to success in mobile. While it is easy to knock Samsung as being a purveyor of cheap plastic and low-end budget phones, the success of its top-tier model is one thing you can't argue with. While it may not yet have Apple's profit margins, the mind-share factor is something Cupertino has to be sweating a bit.

Yonhap, Chosun via The Verge

Falcon Pro Updates To v2.0.4 Outside Of The Play Store, Now Supports A Way To Blatantly Skirt ...