Update: SlashGear has leaked some of the back-plate colors, and claims there will be a total of 16 to choose from. See the picture below for horrifying pastels. 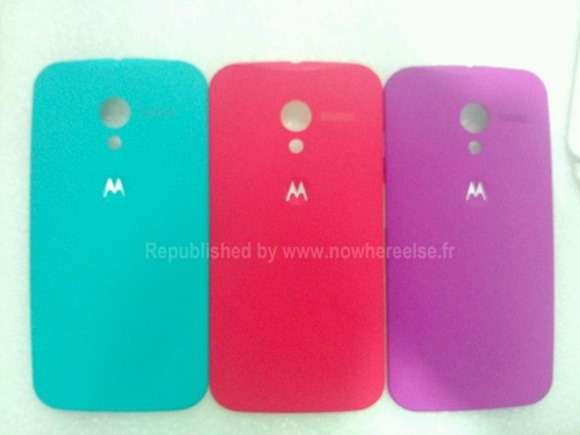 Well, that didn't take long - just a day after Motorola teased the world's first "customizable" phone, ABC News' own Joanna Stern has details on just what you'll be able to do in terms of personalizing your Moto X experience. Are you ready?

Colors and engraving. That's the extent of this "design-your-own-phone" experiment. And, if you want to really push the definition of customization, Motorola will set your phone wallpaper for you from the factory. Not that that's a bad thing, but it's also something that most people, you know, kind of do themselves.

As for the colors, you'll actually get two things to tweak. The first is the back-plate, which makes sense. You'll also be able to separately choose the color of the trim around the edges of the phone. That's kinda neat. The customization will be accomplished through a web store interface on Motorola's site. The engraving option basically sounds like what Apple has been doing with iPods and iPhone for a while - text only. What's unclear is whether devices purchased on contract will be customizable, or if this is an option being reserved for those who purchase devices outright. I've got to assume somehow, though, that some on-contract purchases will be eligible for this treatment, as that is undoubtedly how the vast majority of Moto Xs will be purchased.

ABC goes on to explicitly kill any notion that the phone's internals will be customizable. While there will be multiple storage options, you'll be stuck with the same basic components as everyone else (which makes sense - an internally customizable smartphone is an engineering and manufacturing nightmare).

ABC also claims the device is in testing with Android 4.2.2, and will utilize hardware sensors extensively to perform tasks like launching the camera with a "flick" (I have no idea why you need a sensor to do this, unless it's a touchpad), or activate speakerphone mode when the phone detects that you are driving. Basically, the kind of stuff we've heard a half-dozen times before. For more, head to the source link below.