While Samsung has been dipping its toes into the single-screen multitasking world, Google has yet to do the same. According to noted Android and Google tipster ryan_socio (Ryan Matthews, not his real name), that's about to change. Ryan posted a message to The Verge's social user section, detailing an upcoming version of the YouTube Android app that will let users watch videos and interact with the rest of Android at the same time. 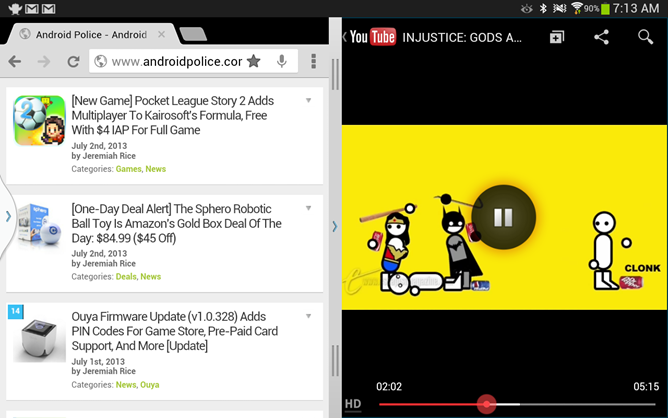 According to Ryan's description of the current test app, you'll start a video using the familiar interface, then send it to a smaller window via a swipe button in the corner. At that point you'll be able to continue browsing videos and whatnot. At the moment this functionality is only working within the YouTube app itself, but a system-wide implementation may be ready by the time the final update is posted.

We've spoken with Ryan on the topic, and he's told us that a much-requested audio-only mode may be coming as well. This would allow you to start a video and switch to another app while the audio continues in the background or when the screen is off, not unlike desktop operating systems. This feature is apparently less locked-in than the multitasking window itself, and may or may not make it in the same update release. Ryan is broadly guessing that the new version of the YouTube app will be available in six weeks or so, though he cautions us that this is a very non-specific estimate.

We tend to pass on rumors like this, but Ryan has a solid history of accurately predicting Google-related events, like the new Gmail interface, Babel/Hangouts, the latest Nexus hardware, Android 4.2's multi-user support, and so on. Multitasking YouTube video is real, and it's in the works.

Note: the screenshot above is from Samsung's mutli-window mode, and used only for illustration.