Barnes & Noble may be toning down its Android tablet business, but they'd still really appreciate it if you bought some books from them. To that end, they've updated the Nook Android app to version 3.4, with a focus on better magazine browsing and book images. Now Android tablets with a resolution of 1280x720 or higher (which should be pretty much everything made in the last year, barring some off-brand hardware) have access to bigger, sharper HD scans of magazines. 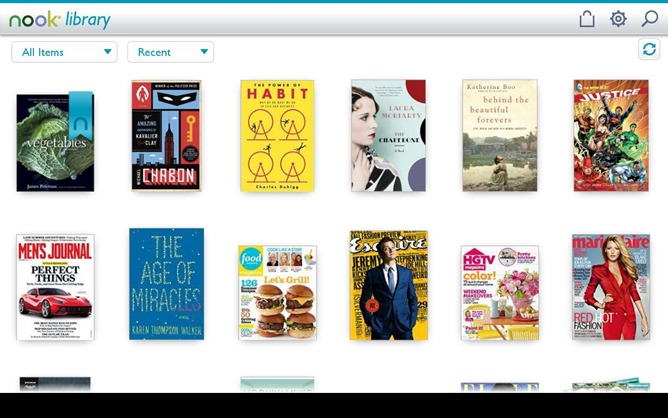 New magazines have been added to the library as well: WIRED, Vanity Fair, GQ, Glamour, and SELF. These "HD" magazines are apparently not available on smartphones - I couldn't see them in the store with my RAZR M, while some other magazines were available for purchase and subscription. Illustrations within standard ebooks can now be enlarged, so you won't have to squint at the puzzle illustration from the latest Dan Brown mystery.

Lastly, there are a couple of accessibility additions for blind and reduced-sight users. Android's triple-tap Screen Maginifier introduced in 4.2 now works with Nook (though it's not clear how this is different from its standard behavior) and the text-to-speech TalkBack feature (Android 4.1 or higher) can now be applied to individual lines of text within magazines and ebooks. It works quite well, so long as you're acquainted with TalkBack's modified navigation scheme. There are also some requisite bug fixes which have not been detailed.