Fred has gotten around. He's fallen from great heights, he's run across great distances, and now he's hitting the slopes in Skiing Fred. Granted, after watching the trailer for this new release, we see that skiing really isn't all that different than falling. Fred's still scared of the Grim Reaper, and there will still be blood. Fred will bleed onto pristine snow, get hit by meteors, and dissolve into rivers of molten lava. 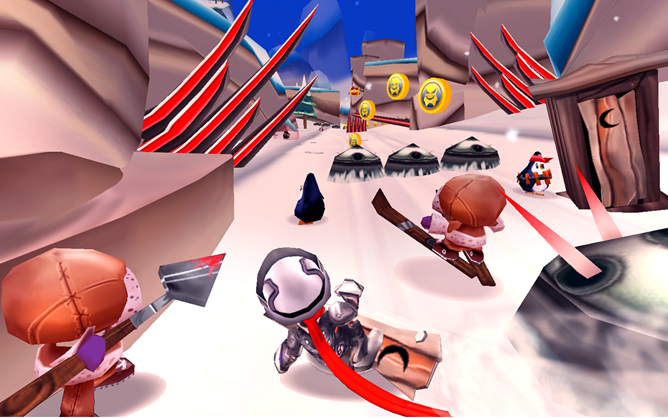 You play Skiing Fred by tilting your phone. Jumping is performed by tapping on the right side of the screen, and braking occurs by tapping on the left. It's a simple setup, and while tilting hardly gives you pinpoint control of Fred, it works well enough to be playable (though the game suggests that you can play it best using the NVIDIA Shield). The graphics are bright and vibrant, albeit basic. This download is under 40MB, and it shows. But looking past that, this game runs smoothly, deviates from the usual Temple Run formula, and is rich with unlockables. Players can also sign in with their Google accounts and share their skills with the world.

Like other titles in the series, the game is free to play but offers fake money in exchange for real money. This money can be spent on unlockables that you can otherwise acquire with enough time and dedication. Good deal? Cool. Widget's below. Sprint Shuts Down Nextel iDEN Network As Scheduled, Will Gobble Up Spectrum For CDMA/LTE

GLASSTESLA Combines Tesla Cars And Google Glass: It's The Closest Thing You Can Get To KITT