While we were collaborating on the Galaxy Note 8.0 review, Cameron and I wondered what the "sweet spot" for pricing on this tablet would be. This is it: at $300, the Galaxy Note 8.0 becomes an easy recommendation rather than an exercise in compromises (especially if you're looking for a Goldilocks mid-sized screen). eBay has Samsung's latest stylus-oriented tablet for $299.99, assuming that you're OK with a manufacturer refurbished model. Shipping to the US is free, and you may not have to pay sales tax unless you live in New Jersey. 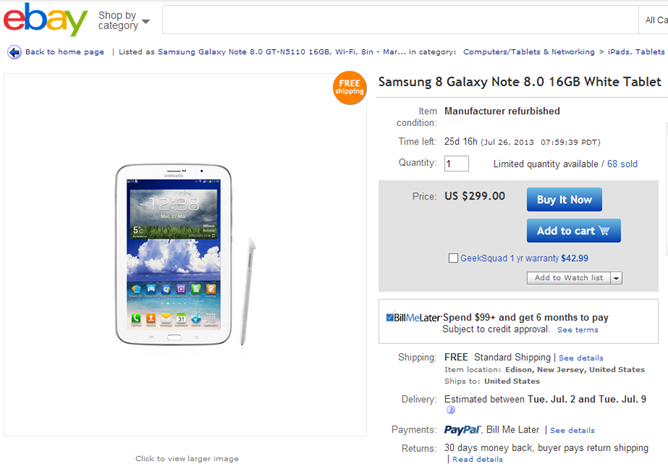 The Galaxy Note 8.0 features some pretty respectable hardware, most of it in common with the older Note 10.1: A 1.6Ghz Exynos quad-core processor, 2GB of RAM, 16GB of storage, a MicroSD card slot, and a 5MP rear camera (sans flash). The 8-inch LCD is a bit disappointing at 1280x800, but if you're looking for something with the software features and digitizer of the Note line, it's acceptable. The "giant smartphone" style that Samsung seems to be plastering onto every tablet may not be, but that's a style issue. At the moment it's running Android 4.1 with the usual TouchWiz add-ons.

Previously, the cheapest we'd seen this tablet was $345, though due to the refurbished status, it's unclear if the the $25 Google Play Store promotional credit applies to this deal. AT&T will sell you one with LTE for $400 (on-contract - ouch), and there's a black/brown model floating around for the same price.