Cross-platform specialist Bluestacks has already thrown its hat into the Android mini-console ring with GamePop, currently in the pre-order stage. Today the company announced a second option, the GamePop Mini, which will use the same subscription model as the "full-sized" console but come with free hardware, along with a 12-month contract. Specifications for the GamePop Mini have not been released, but it will be less powerful and have cosmetic variations from the standard model. Pre-orders for the GamePop Mini will begin on Monday, July 1st. 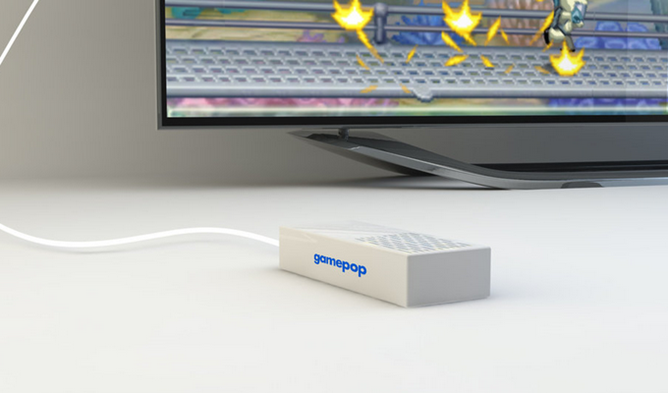 Here's how it works: you sign up for a 12-month contract with Bluestacks' GamePop service at $6.99 per month. Bluestacks will send you a GamePop Mini for free, and you can play their selection of games on your TV as much as you like, in a Netflix-style "all you can eat" model. If you cancel your contract, you return the (working) console to Bluestacks, plus a restocking fee. Those who buy the standard $129 GamePop (or pre-order it to get the full-sized hardware for free) will own their hardware outright.

From the GamePop FAQ page:

The GamePop will be more powerful than the Mini, but the Mini will be able to handle all of your favorite apps and games plenty well. There may also be more peripherals available for the GamePop.

What happens if I get the GamePop Mini for free and later I want to cancel my subscription?

If you cancel your subscription after 12mo there is no fee and you keep the console. Canceling within 12mo simply requires you to return the Mini to us in working order and pay a small $25 restocking fee.

Currently Bluestacks has games from noted developers HalfBrick, Glu, and Intellijoy, among others. (Vector Unit's Shine Runner was featured in the initial video, but there's no mention of it below - perhaps the GamePop Mini can't handle the more advanced 3D graphics.) Bluestacks will also be bringing at least some iOS developers into the GamePop fold via Looking Glass, a virtualization layer that allows iOS apps and games to run on the GamePop hardware. At the moment, it's not clear if Looking Glass will be enabled on GamePop Mini.

Bluestacks is aiming for a winter 2013 release for both the GamePop and the GamePop Mini. The company has yet to reveal a controller design or a full list of participating developers.

“We have always planned on having a free console option,” said BlueStacks CEO, Rosen Sharma. “The biggest value of the GamePop service is its content – not the box. Hardware costs have come down so fast that we’re able to undercut the rest of the market. With the free promotion we’ve been doing in June we’re already seeing a ton of adoption. That volume then attracts more developers and therefore more and better content. It’s building momentum.”

In addition to announcing a lineup of several popular Google Top Developers, BlueStacks also came out with its “Looking Glass” technology earlier this month. Looking Glass will allow iOS-only developers to easily launch on GamePop. Titles such as iOS’s first major franchise the Fieldrunners series will be able to come to TVs this way.

“We want to make things as easy as possible for app developers to come on board,” said Ben Armstrong of the company’s developer relations team. “There is a virtuous circle between great content and volume that we’re having a lot of early success jumpstarting that so far. The launch titles a service comes with are critical.” Pre-orders went on sale May 9 for GamePop at Gamepop.tv and while not releasing specific numbers, the company reports they are stronger than expected. The free promotion for the GamePop console will end June 30, when it will go back to its regular price of $129. The GamePop Mini will be available for pre-order July 1. It is slated to ship this winter.